I just had to blog about this, seeing as how here in Central Texas we're into our third straight week of near-or-hotter-than-100-degree temperatures. And summer just officially started on Sunday!

So any mention of ice, which we are going through by the bucket loads in our tea, is welcome.

Not so, however, for residents of Alaska.

In colder climes (I vaguely remember those), warming weather can create ice jams or, as they also are called, ice dams. These also begin with warming weather, when ice in rivers starts melting and breaking into pieces that float downstream, as shown in the photo below from the National Oceanic and Atmospheric Administration (NOAA). Simultaneously, water from melting snow flows into rivers, causing floods behind the ice blockage. 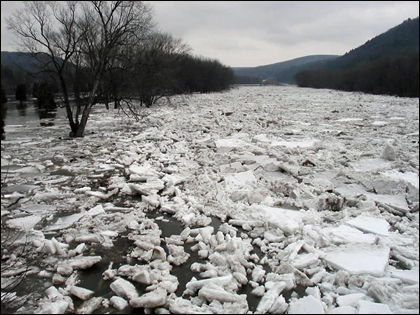 But those on the other side of the natural dam aren't out of danger. When the ice dams break up naturally as the ice continues to melt, the water that had been held back then rushes further downstream, causing flash floods in those areas.

Such was the case for many Alaskans this spring.

Now, says the IRS, those folks who suffered through flooding and other ice jam damage may qualify for tax relief.

Following flooding and ice jams on April 28, the president declared Alaska Gateway, Kuspuk, Yukon Flats and Yukon-Koyukuk regional educational attendance areas a federal disaster area. As a result, the IRS is postponing until June 29 certain taxpayer deadlines for those who live or own a business in the disaster area.

Similar tax relief is available to other victims of major disasters. The IRS keeps a running list of all tax relief due to major natural disasters.

Getting ready: The IRS also has issued its own guidance encouraging taxpayers to take tax-record precautions during the 2009 hurricane season.

Several of the IRS recommendations are identical to my suggestions in Hurricane season financial preparations -- make digital copies of important documents, create photographic records -- but the agency also addresses an issue that could affect a business struck by a disaster.

If you're an employer who uses a payroll service, the IRS says to ask that service if it has a fiduciary bond in place. The bond could protect you, the employer, in the event of default by the payroll service provider.

Also remember that once you dig out of any disaster, you might be able to get some tax help from the IRS, either by filling a casualty loss deduction claim on next year's tax return or, in certain disaster situations, by filing an amended return to get the tax help sooner.

The IRS also notes that it has specialists available who are trained to handle disaster-related issues. You can reach them with a toll-free phone call to (866) 562-5227.

And the agency will provide you with copies or transcripts of your tax returns at no cost if you're located in a federal disaster area. If you haven't taken the storm prep precautions, you'll need that earlier tax paperwork to get storm-related tax help.