My neighbors here in the Lone Star State's capital love their bicycles. That's no surprise in the city that is home to seven-time Tour de France champ Lance Armstrong.

How committed are Austinites to this transportation alternative?

Temperatures here have been near or over 100 degrees for weeks, yet bicycle riders, many wishfully attired in yellow biking jerseys, still have been hitting the roads and hills -- yes, inclines in sweltering weather! -- in droves.

So there was generally joy when it was announced that the guy who stole Lance's $10,000 ride while he was competing in a California race would be going to jail for the offense.

Is the three-year sentence, expected to be officially handed down next week, too long? Sports Pros(e) has some good thoughts on the legal considerations involved in the case.

Biking tax breaks: As for me, being a tax geek, all this talk of Lance's bike brought to my mind a two-wheel tax break and the injustices contained in it. 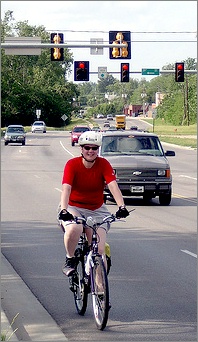 First the good news. Since bicycling commuters have been a part of the tax code that allows for employer reimbursement of certain workplace transportation costs.

The Bicycle Commuter Act, a separate bill that languished in Congress for years, finally was enacted last October and took effect this year.

The original goal was to give cyclists the same employer-provided tax-free fringe benefit status as workers who receive qualified transportation benefits, or QTFs, for using public transit or driving (parking, actually) their cars to and from work.

But things didn't quite work out that way. Folks who take buses, trains, commuter vans or drive their own autos still get a better reimbursement deal from their bosses. But at least bikes this year finally make it into the mix.

Under Section 132(f) of the Internal Revenue Code, bicyclists can use special tax-favored workplace accounts to help defray some of their special commuting costs. This includes such things as the purchase of a bicycle, bike lock, helmet, bike parking fees, shower facilities and general bike maintenance.

Depending upon how your company offers the commuter fringe benefits, you might need to provide receipts to be reimbursed, sign up for regular monthly payments or deal with a voucher system offered by your employer.

Unfair limits? While the new tax-favored transportation benefit was generally welcomed by bicyclists, it does have some limitations.

It's available any month that an employee meets two conditions:

So if you take the bus and load your bike on the front of that public transportation option, and then use your bike to get from a bus stop to your job, you only get the mass transit QTF reimbursement. The reason you'll opt for the bus payback is that it's more than the allowable bike money.

The mass transit commuting benefit, however, since March 1 (thanks to changes in American Recovery and Reinvestment Act of 2009, better known as the Obama stimulus plan) has paid up to $230 a month, the same amount available to workers who drive to the office and pay to park.

These commuter account limits will be in effect through 2010 with an inflation adjustment.

Previously, parking payments were larger ($230 a month vs. $120 a month), which mass transit advocates saw as favoring drivers. The change evens the playing field for all commuters.

All, that is, except bicycle commuters.

Comparing costs: In 2009, that's a maximum $240 in tax-free fringe benefits for commuting by bicycle. Compare that to up to $2,540 for mass transit and van pool commuters ($120 for January and February commuting costs plus $230 for each of the next 10 months) and $2,760 in tax-free transportation fringe benefits for workers who this year drive to work and pay to park. 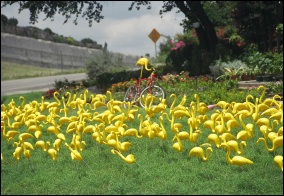 What's wrong with this picture? The photo to the left (taken by the hubby) is an amusing tribute by a local nursery to Lance's historic seventh Tour win.

But the tax-break image isn't that pleasant.

In fact, folks who commute in the most exhaust spewing method get the biggest tax rewards.

So this hot Texas weather isn't the only thing that's discouraging commuters from taking the most environmentally friendly route to work. The tax code also is a deterrent to truly energy-efficient transportation.

Expansion efforts: The sponsor of the Bicycle Commuter Act is trying again.

In February, Rep. Earl Blumenauer (D-Ore.) introduced H.R. 863. This bill would amend the tax code to allow employees use of both the transit and bike benefit in the same month.

So far, the bike bill is still parked in the Ways and Means Committee. But if it does eventually roll out for further consideration, Blumenauer hopes this time he gets to vote for it.

Last October, although his bicycle commuter language was part of the financial services bailout bill, the Congressman voted against the measure because so many of his constituents opposed it.