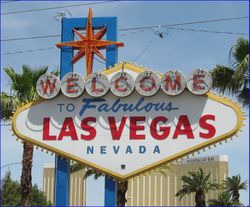 Wednesday, we headed out earlier than usual to visit some Texas friends who now live in Henderson, just a few miles south of The Strip.

The trip out of town meant have time to blog yesterday before we hit the road. But it did give me the chance to take my very own photo of the famous Welcome to Las Vegas sign.

After catching up with our friends (it was great seeing you again, Pat and Sylvia!), the hubby and I got right back to checking out some more Sin City highlights.

You might be wondering, since I noted previously that we're not into gambling, why we decided to vacation in Vegas. We have some very good reasons:

The hotel price break came because we agreed to sit through a timeshare sales pitch.

The salesman will be apoplectic if he reads this. He was adamant that he wasn't pitching a timeshare.

In the traditional sense, he has a point. This particular resort company uses a points system, whereby you get a deed to a particular property, but you rely on points that a particular level of ownership gets you to go to any of its other properties worldwide.

The salesman tried hard, too hard in fact. He and his colleagues spent much more time than they assured us it would take to try to convince us to buy. We didn't.

And they lied. Since the hubby and I opted out of the opportunity, we didn't "part friends" as everyone promised would happen regardless of our decision. C'est la sales business.

Second property tax issues: I'm done with timeshares, for the duration of this trip and forever. But being forced agreeing to sit through the presentation got me thinking about timeshares and taxes.

According to David McClintock, a CPA writing for TimeSharing Today, timeshare ownership does offer some tax deductions.

For example, interest paid on a loan to buy your fractional vacation property is often deductible. As with other second homes, says McClintock, tax law requires that the loan be secured by the financed property in order for the interest to qualify as a deduction.

Property taxes might be another write-off if the amount has been assessed against your individually owned week of occupancy. Again, as with more traditional real property ownership, there is no limit to the number of properties for which you may deduct real estate taxes.

So if, for example, you own five timeshare weeks and you pay property taxes on all of them, you can deduct all those amounts.

The key here is that the taxes be billed or stated separately on accounting documents sent to you. That allows you to clearly show the IRS that you are paying these deductible property tax amounts.

Sometimes, the taxes are included in your regular maintenance fees. That fee statement or an annual accounting report of it to you should indicate any potentially deductible items included in the fee.

If the property tax portion is not designated, contact the timeshare manager or administrator and have that person or company write you a letter detailing the charges. It needs to state that you paid a specific amount in maintenance payments on your timeshare, of which a portion, delineated in the document, was paid toward the property's real estate taxes. 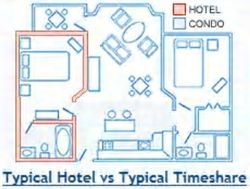 In addition to these timeshare tax considerations, McClintock examines the tax implications of renting your timeshare, selling your ownership and, if you prefer, disposing of your timeshare by donating it to charity.

All of McClintock's articles are reproduced on the online timeshare marketplace site RedWeek.com. That floorplan graphic there to the left is from the site. Apparently, "red week" is the industry's term for the season that a property is available for timeshare use.

Are you a timeshare owner? Do you take take tax advantage of it? Do you have advice for those who, unlike the hubby and me, might be potential owners? Let us know by leaving a comment.

The key here is that the taxation be charged or mentioned independently on bookkeeping records sent to you. That allows you to clearly display the IRS that you are shelling out these insurance deductible residence tax volumes.

Contrary to what many timeshare sales websites would like you to believe, you can sell a time share on your own, whether you own a timeshare week or points. Completing the timeshare sale process on your own will allow you to sell your timeshare for free, or almost free.

I planning on moving to vegas and yes he is right, its way better at night

Very interesting information. I great perscpective on the industry. Thanks! -Dan Hudson

Las Vegas is a very cool city at night. During the day it is not a very pretty city. But there are lots of interesting things to do.