The wages of sin is health care

Or so say the Senate's tax-writing committee leaders.

Max Baucus of Montana, the Democratic chair of the Senate Finance Committee, and the ranking minority member, Republican Charles Grassley of Iowa, have put together a preliminary plan to pay for President Obama's health care reform.

Naturally, taxes are part of the proposal. Specifically sin taxes.

You know what I, and they, are talking about. All those nasty habits that tend to make us unhealthy.

Alcohol, soda and other sugary drinks would be taxed to finance health care reform, according to some staffers privy to revenue-raising discussions.

Senators are calling these "lifestyle" taxes, instead of sin taxes. Nothing is spelled out specifically in Finance Committee Chairman Max Baucus' health care "Call to Action" white paper, but mention of the encouragement of healthy lifestyle choices begins on page 9.

What's your taxable sin? Former House Speaker Thomas P. "Tip" O'Neill once said, "All politics is local." The Massachusetts Democrat was right, but I'd like to extend that specifically to taxes.

Support for or opposition to any tax proposal generally correlates to "just how does this affect my bottom line?"

Personally, sin taxes don't cause me much of a problem. It's not that I'm so saintly. It's just that neither the hubby nor I smoke at all or drink that much booze.

But if downing original Coca-Colas is a sin, then I better pack lightweight attire for the trip to the hereafter.

Cokes are my favorite source of liquid sustenance. I try to keep my intake to one a day, but I've got to have at least one.

Over the years, I've watched the price of soft drinks rise along with everything else. Nowadays, we only restock our Coke larder when the products are on sale. Take today. I made a special trip to a local grocery chain because they were selling 24-can packs for $5.

According to my trusty calculator, that's that's 21 cents a can. I'm willing to pay that, around $77 a year, for ice-cold liquid refreshment.

Regularly, though, the Coke cartons go for twice that. And then there's sales tax, which here in Austin is 8.25 percent.

Hoping for continued bad habits: Will I quit buying Cokes or as many of them if Washington slaps a "lifestyle" tax on top of my purchase? Probably not. And that's what lawmakers are hoping.

So in the perverse way legislation is designed, they need taxpayers to maintain their unhealthy lifestyle choices to pay for the medical coverage such choices demand. 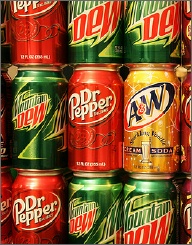 Dan Mitchell, writing for Slate's The Big Money, says "Taxing all sugary drinks at a rate of 3 cents per every 12 ounces would raise about $24 billion over four years, according to the Congressional Budget Office."

That will help overhaul our health care system, but still isn't enough. Revamping U.S. medical coverage is estimated to cost around $1.2 trillion.

Soft drink tax not an easy sell: While I understand lawmakers looking for every cent they can find, I suspect the soda tax won't make it into the final product. Not only do Coca-Cola and PepsiCo. have deep pockets and big-time lobbyists, public sentiment seems to be on the beverage makers' side.

Just ask New York Gov. David Paterson. He learned the depth of distaste for a beverage tax when he proposed such a levy on sugar-laden beverages.

In April 2008, Down East lawmakers imposed a tax on the syrup used to make soft drinks, a move that raised the price of soda by four cents a can. The new revenue was to go to the state's health insurance program, but outraged voters overturned the tax the following November.

Soda tax proposals do "seem to offend people's sense of what it feels like to be an American," Verenda Smith of the Federation of Tax Administrators told Tax Analysts.

Biblical beverage could be target, too: The "wages of sin" phrase borrowed for this item's headline comes from the Bible, Romans 6:23: "For the wages of sin is death; but the gift of God is eternal life through Jesus Christ our Lord."

Coke has been around for a while, but I'm pretty sure it wasn't available in Biblical times. However, the wine mentioned repeatedly in the Bible also is a popular sin tax target and could also end up funding health care reform.

Regardless of which sin taxes do make it into law, at any governmental level, you usually find a lot of folks invoking the Lord's name, and not always in a good way.

More ways to pay: In the coming days, I'll take a look at other less sinful, but equally contentious, proposals that Senate tax-writers are considering to help pay for health care reform.

This is a slippery slope. If these things are really bad, and, I believe they are, along with tobacco and drugs and alcohol, we should simply(not so simple, I realize) take them off the market. This idea of taxing bad habits is bleeding over into the illegal drug market. My warning is that, as soon as we do this, we will see the end of this nation. Really.

I guess my concern is, where does it stop? Tobacco and alcohol I suppose are sinful delights for some, but soda too? I think we are pushing the envelope here and opening up some kind of Pandora's Tax Box - if you will.

Yes, lawmakers are likely betting on a low elasticity of demand. It may seem like their betting on the wrong horse but consider two things.
1) Coke has easily available substitutes - store brands. These would also be taxed. Most likely "soda addicts" would simply change brands.
2) If people stop drinking soda all together the tax has "done it's job" and decreased a load on the health care system.
It's kind of like appropriately implemented automatic-ticketing traffic cameras. If you place them in high accident areas and advertise that they are there you wind up with a win-win scenario. Either A) people slow down and drive safer or B) you get revenue from the people who ignore it.