Sports and charitable causes have long been linked.

Most professional athletes have charitable foundations. They tend to be associated with causes in which the athletes have a personal interest and/or which benefit children.

From a business perspective, affiliation with a popular cause can add a "real person" view of a well-paid professional athlete. And, of course, careful structuring of a charitable foundation can provide the millionaire athlete with some nice tax breaks.

For more than a decade, the Dallas Cowboys NFL team has supported the various programs of the Salvation Army. NASCAR's Kyle Petty and his wife Pattie created the Victory Junction camp, in honor of their late son Adam, for kids with life-threatening and chronic illnesses.

But today I learned of a particularly interesting sports-charity deal.

Goal!!!!! The hubby is a soccer fan. This afternoon, Barcelona beat Manchester United for the Union of European Football Associations, or UEFA, championship. Basically, it's soccer's Super Bowl.

Since the hubby was taking off a couple of hours to watch the game, I decided to join him. Who would have thought it would lead to a tax blog post. OK, maybe I thought it could. But I digress.

In the rest of the world, sports franchises have no problem wearing jerseys emblazoned with a sponsor's name rather than the team's nickname. In today's championship match, the white sweaters of Man U bore AIG (yes, that AIG), while Barcelona's jerseys promoted UNICEF. 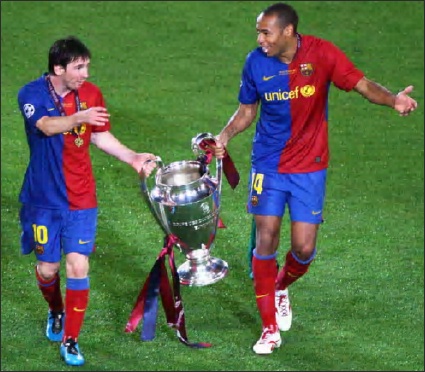 Wow, how could a global charity get away with asking for donations while spending the big bucks it takes to sponsor a sports franchise?

They don't, the hubby informed me. "Barcelona's so rich," he said, "they just decided to do it for free."

And, as the hubby frequently points out to me, he was right.

Unique arrangement: Back in the fall of 2006, Futbol Club Barcelona and UNICEF forged a partnership. During the announcement ceremony, the sporting club unveiled its new jersey featuring the UNICEF logo on the front. It was the first time in the club’s century-plus history that a logo had been featured.

In addition to the UNICEF-branded jersey, Futbol Club Barcelona also agreed to donate at least €1.5 million per year to UNICEF over the next five years to support UNICEF's international programs

The club's philanthropic efforts also include its foundation, Fundació Futbol Club Barcelona, which is committed to social, cultural, educational and humanitarian activities in Catalonia.

If you want to give to a nonprofit championed by an athlete or sports team, be sure to check it out thoroughly just as you would any other nonprofit group.

Unfortunately, foundations created by athletes can run into the same management and compliance problems that bedevil other nonprofits.

But if your favorite player's cause checks out, go ahead and be a part of his or her team by making a donation. It could help cut your own tax bill, too.

As well as being a great vehicle for carrying the brand and message of charities, sport can also be an end in itself for many non-profits.

There is now an increasing number of charities that champion the growth of sport locally and overseas. Whether promoting access to sport for the disabled, or carrying sexual health messages into communities through sports events, the use of sport in charity goes much further than just having a sports star as a figurehead.