Our suburban neighborhood held our annual garage sale event this weekend. Rather than have 100 yard sales scattered across 100 Saturdays and Sundays, everyone puts out their junk on the same day. 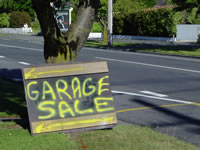 The hubby and I actually find it pretty annoying. We don't participate, either as sellers or buyers, although I have been tempted to wander down the block and see what items my neighbors are trying to unload.

But the big issue for us is that we get up much later than our neighbors, on both weekends and week days. We're used to our commuting neighbors' cars cranking up too early Monday through Friday, but once they're out of the driveways, we can go back to dozing.

With the garage sale, however, it's a steady stream of vehicular noise starting at 8 a.m. on Saturday. I don't know how some of these folks' cars pass their safety and emission inspections, given how their vehicles obviously don't have mufflers.

But I digress. And at least, as I mentioned, it's just one weekend a year. And it's over. So now we've got 51 other less noisy weekends ahead of us.

Annual garage sale tax query: Along with the community garage sale each year,  I also get the same tax question. Do I have to pay taxes on the money I made from unloading all my unwanted stuff?

Sellers, you are in tax luck.

Although the IRS has a reputation for trying to get a piece of just about every cent we bring in, when it comes to the occasional garage or yard sale, you generally do not have to report the sales amounts as income.

The reason? In such sales, you're generally selling household items you purchased over the years and used personally. More to the tax point, you're selling them for less than you paid for them.

In discussing sale of personal items in Publication 525, the IRS says, "if you sold an item you owned for personal use, such as a car, refrigerator, furniture, stereo, jewelry, or silverware, your gain is taxable as a capital gain."

The key phrase here is "capital gain," and that's underscored by the example the IRS offers:

You sold a painting on an online auction website for $100. You bought the painting for $20 at a garage sale years ago. Report your $80 gain as a capital gain on Schedule D (Form 1040).

But most items sold at garage sales and the like don't bring in more than what you paid for them. In fact, in most cases your total take for all yard sale offerings will be far less than what you originally paid

Some folks also point out that when you bought the items, you probably paid sales tax on them so taxing any money you make off them would be double taxation. But that's not really a concern of the IRS, since the sales taxes are state levies.

Is it a business? However, if you make a living via garage sales and, more often nowadays, buying items and then reselling them on eBay or another online auction site, be careful.

You've entered business territory and you could be liable for income and self-employment taxes on your sale proceeds.

But for the once or twice a year attempt to turn your trash into another person's treasure, no worries. Just do your night-owl neighbors a favor and don't welcome bargain shoppers until 10ish or so.

The Tax Guru, CPA Kerry M. Kerstetter, has more on taxes and garage sales in his post eBay Auctions and Garage Sales.

Consider charity instead: As yesterday's garage sales wound down, I noticed a Salvation Army truck on our block.

Either some neighbors called the charity to pick up items that didn't sell, or the truck was simply cruising the community looking for people who didn't want to schlep unwanted stuff back inside their houses.

Either way, donations are a good way to dispose of property you no longer need or want. And if you itemize, you can deduct the fair market value of the goods.

I've blogged about charitable giving many (many, many) times, so I won't repeat all those considerations here. Rather, you can check out my year-end tips on charitable giving, which apply year-round, too!

This is how I understand the "double taxation" referred to above: It is not so much the use tax you paid to use it (the seller calls it sales tax), because these are state levies. The double taxation comes from the IRS: once on the income you earned and used to purchase said items, and once again when you sell them. That is why they tax you on the gain of the sale (must have made more money on the item than what you paid for it in order for it to be a gain).

Neelie, it's actually twice a year (spring and fall). And participating isn't an option; we get rid of our unwanted stuff regularly by donating it to Goodwill. I don't begrudge neighbors trying to make a few bucks, but when my walking schedule coincides with the sales, from what I've seen they can't be making much. Most of the stuff wouldn't meet the "good" standard for donations. But that doesn't keep lookers from coming, jamming up our streets for hours, and that's what really irks me. Yes, I am the cranky neighbor!

This event happens ONCE a year, and it's still so annoying to you?

Maybe try participating and you might have a more positive attitude toward a one time a year happening.

Jim, I wish retired. We're just cranky! ;-) Actually, we both work from home for companies that are in other time zones. That allows us to do our work on our schedules, not that of some office. So, being night owls, we tend to do most of our work late and night/into the early morning hours, which means we like to sleep in as late as possible. Which, as noted, isn't as often as we'd like given that our neighbors all work locally and leave early to get to their offices.

What do you do that you don't have to wake up and go to work like the rest of us? Retired and cranky?