Wow! Who would have predicted that Iowa would have a more liberal approach to same-sex couples than California? We are indeed living in interesting times. 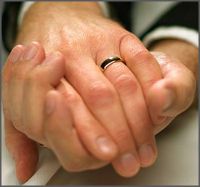 Just in case you didn't hear, the Iowa Supreme Court today issued a unanimous decision that the Iowa statute limiting civil marriage to a union between a man and a woman violates the equal protection clause of the state's constitution.

The decision strikes the language from Iowa Code section 595.2 limiting civil marriage to a man and a woman. It further directs that the remaining statutory language be interpreted and applied in a manner allowing gay and lesbian couples full access to the institution of civil marriage.

The ruling resolved, for now, a lawsuit brought by six same-sex couples who in 2005 were refused marriage licenses by the Polk County Recorder. County officials have indicated that they have no plan to seek a new hearing on the case or appeal to the federal courts, according to the Des Moines Register.

However, state lawmakers immediately began discussing efforts to amend Iowa's constitution to specifically prohibit same-sex marriage. But, according to the Register, such a change would require approval in consecutive legislative sessions and a public vote, which means a ban could not be imposed until at least 2012, unless lawmakers take up the issue in the next few weeks.

Marriage and taxes: So what does this mean to taxes for Iowa same-sex couples? Well, state officials will have to determine how they're going to handle those filings, which will be due in 2010 for the 2009 tax year. (Update, 7 p.m. April 3: Check out Tax Update Blog for the skinny on same-sex marriage and Iowa taxes.)

In California, for example, same-sex couples married before passage of Proposition 8 invalidated the ceremonies can file joint state returns as a married couple.

At the federal level, however, there's no such choice.

The Defense of Marriage Act became law in 1996. That law bars federal recognition of same-sex marriages. From the IRS perspective, that means that only a man and woman, regardless of the marriage law in the state in which they live, can file a federal Form 1040 as a married couple.

So same-sex married couples in the handful of states where their marriages are legal face extra tax considerations each filing season. The National Conference of State Legislatures maintains a list of same-sex marriage, civil union and domestic partnership laws from across the nation.

The tax complications for same-sex couples are detailed in this Marketplace radio story.

As for traditional couples, there are tax considerations, too. Some husbands and wives might find they are paying slight bigger tax bills thanks to the infamous marriage penalty. But marriage also offers many tax advantages.

Here are some things IRS-sanctioned couples need to think about at tax time.

Filing status: For filing purposes, you are married for the full tax year as long as you exchange vows by Dec. 31. Once married, you can send in your returns jointly or as married filing separately.

Marriage penalty or bonus: This tax situation arises when some dual income couples find that their combined tax bill is larger than it would have been if they were still filing singly. Tax law changes since 2001 (and in effect through 2010) have eased much of the possible penalty that many couples once owed. But despite the changes, some couples still face a marriage penalty. This usually happens when their combined earnings push them into the higher brackets.

Some couples, however, actually enjoy a marriage bonus. This is often the case when there is a large difference between a husband's and wife's incomes. Combining the earnings pulls the higher income into a lower tax bracket, providing tax savings.

Home sale tax advantage: When a married couple sells their residence, they get a tax break twice as large as that available to single home sellers. By living in the property for at least two of the five years before selling, a couple can exclude from tax up to $500,000 in sale profits vs. $250,000 for single sellers.

You can read more on each of these tax and marriage issues, as well as a few others, in this excerpt from my book, The Truth About Paying Fewer Taxes.

True, gay and lesbian couples can become registered domestic partners and file jointly that way with the state's Franchise Tax Board, but for purposes of this post, I'm talking specifically about marriages, which were legal for a few months in CA before the Prop 8 vote. I added the FTB link to the post for clarification.

And yes, states will have different rules for residents vs. federal re community property laws and married couples. That's what keeps tax attorneys in business!

What happens in a community property state like CA? do we have one set of property/income rules for the state and another for federal. How do you handle discrepancies for division of property and some of the income tax effects?