Whenever I do our tax return, I feel rich. Unfortunately, that feeling doesn't last.

My "we're rich!" feeling quickly turns to "where did all our money go?"

Then I remember the property tax payments, along with a little bit we socked away, despite the market's downturn, in investments.

We took a couple of short, but very fun, vacations last year that ate up some of it.

And, of course, the cost of just making it through each day 365 times a year took quite a bit, especially in the grocery buying department.

Now we have to settle up our 2008 account with the IRS. I'm not quite done, but I hope to get everything on its merry way by Wednesday's deadline. We'll see.

And when that does happen, I'll be totally over my delusion daydream of being rich. 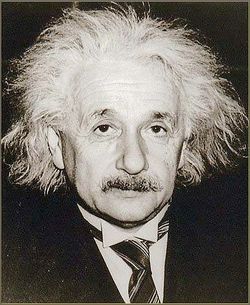 Albert's tax adage: Doing our taxes and thinking how we compare to others in the wealth department got me thinking about Albert Einstein.

Somewhere, still in a box I moved in 2005 from my Florida cubicle to my Texas home office, is a poster of that wild-haired genius and the famous tax quote attributed to him: "The hardest thing in the world to understand is the income tax."

All of us non-Einsteins certainly agree, especially those of us still slogging through forms, schedules and tax calculations.

The relative nature of wealth: But Albert also came to mind today because of his theory of relativity. OK, I know it's about time and space and light speed and all sorts of other things I really don't know that much about.

But being a writer, thinking of taxes led to thinking of Einstein, which led to a brief brush with relativity, which made me think as I look at our 2008 income about how relative everything is.

Yeah, kind of a stretch. But now you have an idea of what the hubby puts up with every day. Have I said lately how much I love and appreciate him and his patience? There, just did!

The worried wealthy: Anyway, the idea of things being relative got another boost when I opened up the Sunday New York Times and saw an article on the current economic woes of Palm Beach, Fl., residents.

We used to live in Palm Beach County, and would cruise the island of Palm Beach periodically just to gawk and dream. Well, according to the Times, life there isn't as good as it once was. Or, as the headline puts it, Recession Pain, Even in Palm Beach.

Again, that pain is relative.

It seems that many of the ritzy enclave's residents are feeling quite poor nowadays. Of course, using the standards you, I and most other folks live by, they still are doing quite well. In fact, we'd still called them extremely wealthy.

You can check out the story to help you meet your personal schadenfreude quota. But the truth is, regardless of how much we make, we're always susceptible to our own perceptions. Or, as one resident told the newspaper:

He imagined a hypothetical couple, in their 60s, who started last year with $15 million -- one-third with [Bernie] Madoff, one-third in the stock market and one-third in bonds. The Madoff millions are gone; the stock market money is down 40 percent. Maybe they’ve got $350,000 a year in income from bonds and dividends.

They've also got expenses. "Taxes and maintenance on their New York co-op and their Palm Beach house are $150,000 a year. They belong to two country clubs, at $50,000." Plus taxes, living expenses, medical, cars, charitable commitments. And perhaps they have children and grandchildren who depend on them.

"It doesn't take a huge stretch of the imagination to see how these people feel poor. … One feels poor the day you spend a dollar more than your income.'

While I find it hard, OK, impossible, to worry about how those Palm Beachers are coping, on a much smaller scale I know just a bit what they're going through.

As I look at my 2008 income and outflow, my own feeling of being rich is indeed very fleeting.

'Bargains' if you're feeling rich: If you are feeling richer than I, the story also pointed out a couple of items on Palm Beach that you might find of interest.

There apparently is a home for sale for $700,000. That's right, just five zeroes. It must be a converted storage shed.

And if you want to add to your closet, you can buy Bernie Madoff's cashmere slacks. They were ordered from Italy, but he was arrested, and his credit card canceled, before he was able to pick them up.

It seems that many of the ritzy enclave's citizens are sensation quite inadequate these days. Of course, using the factors you, I and most other people stay by, they still are doing quite well. Actually, we'd still known as them incredibly rich.