Taking on the tax tea partiers

Bruce Bartlett, Forbes columnist and former Treasury Department economist, has a bone to pick with all those tax tea party attendees (mentioned in this earlier post). 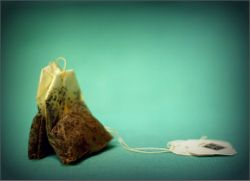 Bartlett thinks this week's tax protests were "largely a partisan exercise designed to improve the fortunes of the Republican Party, not an expression of genuine concern about taxes or our nation's fiscal future."

The reason for Bartlett's skepticism about protest motives? He's got a couple.

First, he says, the Congressional Budget Office was projecting a deficit of more than $1 trillion well before the Democratic majority took office.

He has crunched some numbers that show "the median family tax rate is well below that which prevailed in 2007 if only because in February, Congress enacted a new tax credit that will reduce the median family's tax bill by $800 over last year."

Plus, he says, folks know this. About half of Americans think their federal income taxes are about right. "In only one other year since 1956 have more Americans said their taxes were about right than said they were too high," Bartlett writes.

He backs up his argument, including a table detailing the effective tax rate (taxes paid as a share of income) on the median family, in this week's column, Tax Tea Party Time, Part Two.

He makes some interesting points, and I happen to agree with him about the motivations of the tea party planners, if not all the attendees. Check out Bartlett's analysis and let him, and me, know what you think.

I think a lot of people who do slightly better than median are very frustrated. I read that the median income earners will pay about 3% of their total income in taxes for 2008. My husband and I paid more than 30%. That worked out to be more than my annual salary for 2008 (and I work 40-50 hours a week). Trust me when I tell you we're not even close to being rich.

The burden seems to be falling on an increasingly smaller group of tax payers. I think that's what some people at the tea parties were frustrated with.

I think the majority of the people who turned out to these events weren't so much upset about paying "high" taxes as much as they were protesting how the taxes they pay are being spent...

The problem with his views is one of those paradoxical issues with democracies: if 51% of the voters are slightly happy and 49% are absolutely furious, the 51% matters even though the 49% has a stronger interest. In this case, as the number of taxpayers actually responsible for paying taxes declines, while the number who pay zero or negative taxes increases, those taxpayers are feeling the need to become more active.