The IRS says about 10 million taxpayers will ask for an extension to file their returns.

One group doesn't have to ask. The IRS is automatically giving them another month. But I bet they wish they weren't getting such favored treatment. 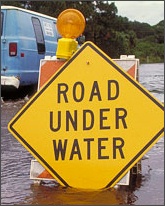 They are victims of the recent severe flooding in Minnesota and North Dakota. These taxpayers have an extra 30 days, until May 15, to file their 2008 federal tax returns and pay any taxes due.

The extension also applies to relief workers who don't live in the disaster areas but are there helping out with recovery efforts. But those Good Samaritans need to take an extra step: Call the IRS at 1-866-562-5227 and let the IRS know before they file or send in any tax payments. This will ensure their returns aren't flagged as filed late.


Most tax preparation software programs have a "disaster" option you can use when you file.

If you file a paper return, write "severe storms, flooding" at the top in red ink.

Affected areas: The storm damaged counties whose residents or workers are afforded an extra month to file include:

In addition, residents of the Standing Rock and Spirit Lake Indian reservations in North Dakota also get the extra month to file their federal returns.

State postponements, too: Both states also have made the same extra-month accommodation with regard to state tax filings.

Check out the revenue offices of North Dakota and Minnesota for details.

For the rest of us: If you just can't get your return completed by next Wednesday and you live anywhere else in the United States, you need to file Form 4868. This will get you six more months to get your paperwork into the IRS.

You can send it in via the U.S. Postal Service, postmarked April 15. The mailing address for each state is listed on the last page of the form's instructions, which are attached to the form itself.

Or you can e-file it sometime before midnight next Wednesday. Tax software programs have the form. If you're eligible to use Free File (had an adjusted gross income of $56,000 or less last year), check it out via the link on the IRS home page, www.IRS.gov.

As I blogged about earlier, this isn't a computer software program, but a way to enter in information and figures that you calculate yourself. Folks who have simple returns or are used to doing their taxes by hand might find this method preferable this year.

But whichever way you choose to ask for more time, do so by April 15.

You still must pay: And I saved the best reminder for last. This is an extension to file your forms only.

When you do send in your extension request, you still must include a payment that is close to your eventual tax bill  -- the IRS would like at least 90 percent of that amount -- or you'll face penalty and interest charges.