Nevada decides against taxing one sin

One Silver State business sector supports a new tax on its members.

So why did Nevada lawmakers ax the tax proposal?

Because many of them think that taxing prostitution, which is legal in parts of Nevada, would add more legitimacy to a practice they find personally distasteful.

But that financial prospect apparently wasn't enough to sway opponents at the state level.

Nevada's bordellos will continue to be taxed by local governments. Brothels also pay an annual $100 licensing fee each to the state.

The brothel industry -- yes, it has its own professional association and lobbyist -- has long supported a statewide tax as an "insurance policy" against future efforts by Nevada to end legal prostitution. 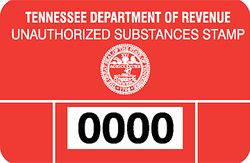 Which sin is worth taxing? The brothel tax battle brings to mind efforts to tax drugs.

Around 20 or so states, such as Tennessee, whose unauthorized substances tax stamp is pictured, have laws that allow them to collect taxes on illegal drugs. The statutes are civil, not criminal, designed just to make money.

Some contend that if drugs were legalized, they would be easier to tax thanks to accompanying regulation of the product. Plus, supporters say, the associated drug crimes would be reduced.

Opponents aren't buying any of those arguments. As with prostitution, drugs are just too far across the sin tax line we've drawn. Few politicians want to be seen as legitimizing drugs, regardless of the revenue potential.

A little closer to that taxable sin line are the legal drugs of nicotine via tobacco and alcoholic beverages. Gambling also gets an OK in Nevada, as well as more limited outlets (state lotteries, Indian reservation casinos) nationwide.

All these vices pose their own set of health, public interest and moral dilemmas, but they've been deemed more acceptable sins. So we'll continue to take what dollars we can from them. And maybe add a few more lesser sins -- is the road to Hell paved with processed sugar? -- for good self-righteous and fiscal measure.

At some point, however, we need to have an honest and pragmatic discussion about what less-than-admirable proclivities can, and should, provide us more tax dollars.

Sin taxes are created and mandated by the law. They provide additional income to the local government. Government can use the taxes collected to create infrastructure and other useful projects for the society.