What are you worried about this tax filing season?

If you're like the folks who participated in a recent CCH CompleteTax survey, you're concerned that you might be making costly mistakes or overlooking tax-saving breaks.

Such worries could be well-founded. The poll of around 1,000 adults, commissioned by CCH and conducted by GfK Roper, also found that most people do not know which tax breaks offer the greatest benefits.

Nearly two in three, or 66 percent, of taxpayers fear they may overlook tax breaks or make mistakes that could cost them in fines or penalties.

When it comes to a federal income tax return,
which are you most concerned about? 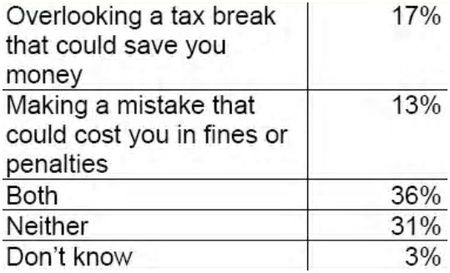 Best tax break confusion: At the same time, most of the polled taxpayers were unable to determine which tax breaks, when given a choice of ones affecting a particular tax area such as those related to children, were most beneficial. For example:

That credit vs. deduction confusion astounds me. Maybe it's just because I preach it all the time. But I'll say it here once again:

Need more convincing? This excerpt from my book, The Truth About Paying Fewer Taxes, elaborates on the tax value of credits.

Retirement saving hesitation: Another question that caught my eye deals with retirement planning. Only about half of the surveyed taxpayers said they plan to contribute to tax-advantaged retirement plans this year.

For 2009, which best describes
how you will be contributing
to tax-advantaged retirement accounts?

Given how the market nosedived earlier this year, that trepidation is not that surprising. But you don't have to put your nest egg in stocks. You can opt for less volatile savings options. The key, though, is to keep your plan in place and, when practical, keep adding to it.

"Many people have immediate demands on their finances given the economy, but they should also try to save as much as they can for retirement. Using the available tax benefits offered for IRAs, 401(k)s and other retirement accounts means more money being set aside for retirement and less being paid in taxes," said Bergstein.

Check out the complete CCH survey results. Do they reflect the ones you have? Inquiring minds want to know, so please share by leaving a comment below.

I've helped some people with taxes this year. Too many of them pulled money out of 401ks, or IRAs, and didn't set aside the taxes on those amounts. This economy really scared people into doing some pretty impulsive things, without considering any of the tax consequences!

Side note: The other thing that kills me is when personal finance bloggers (who should know better) use "refund" and "return" interchangeably.