Not too long ago I talked about the possibility that you might need to coordinate your state withholding in light of the recently enacted American Recovery and Reinvestment Act, aka Obama's first stimulus package.

Well, the effects of the new Making Work Pay credit continue to give us a lot to ponder in this area, even before it starts be doled out in April via reduced paycheck payroll taxes.

In addition to the state withholding issues, folks who aren't eligible for the full $400 paycheck payout will face some tax considerations. Below is a quick look at such taxpayers.

Dependents
Work doesn't pay for dependents, at least not when it comes to this new tax credit. They're not eligible for Making Work Pay money, even if they otherwise qualify because they have a job. This could affect students who have part-time jobs.

In most cases, the employers of these workers will go ahead an adjust payroll withholding. That means that the kids who do get the credit will have to pay it back on next year's tax return they'll have to file.

Nonresident aliens
They face the same situation as dependents; that is, they also aren't eligible for Making Work Pay credit.

If they get the credit this year via payroll tax reductions, they also will have to pay it back when they file a return in 2010. 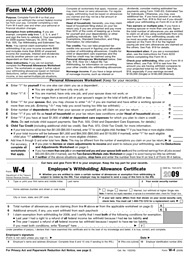 In both situations, dependents and nonresident aliens might want to file revised W-4 forms to account for the credit.

The American Payroll Association suggests a single filer divide $400, the amount of credit to be paid out by the end of the year, by the number of paychecks they will receive between April 1 and Dec. 31. That amount should go on line 6 of their new W-4 so that it will offset the ineligible credit amount they'll be getting from the new payroll withholding tables.

Married workers
Couples who both have jobs are eligible for a combined $800 Making Work Pay Credit. The one concern here is that the couple's joint earnings could push them over the limit.

If a couple takes home $800 extra this year via reduced payroll taxes but finds they exceeded the $150,000 limit, they'll have to come up with the over payment on their 2009 returns.

To avoid that unhappy payback next year, couples should complete the W-4's dual earner worksheet. This will help a husband and wife each claim the appropriate amount of allowances.

Multiple job holders
Workers holding down two or more jobs also should make sure they factor the multiple incomes into their W-4 filings. If not, they could end up getting too much credit this year and, like the married couples, have to pay it back next year.

And the same worksheet that couples use to fill out their W-4s applies to folks with two jobs.

The form's instructions note that if both spouses work or a taxpayer has multiple jobs, withholding usually will be most accurate when all allowances are claimed on the W-4 for the highest-paying job, with zero allowances being claimed on the others.

About that payback
Just how will the credit payback work? We don't know yet. That's something for the 2010 filing season and we -- and I'm talking you, me and the IRS -- are still trying to just make it through the 2009 filing season.

You've got about a month now before your boss, or the payroll company to which the task is outsourced, begins making changes, so take the time to make sure that if your tax circumstances require it, you adjust your withholding appropriately.

Well..it's November 13th and all of this is coming true. The new forms Schedule L and Schedule M as well as the revised 1040EZ are available online. The 1040EZ now has a worksheet to complete to comply with the latest Recovery and Reinvestment Act. There might be some angry taxpayers come this filing season if you don't respond to the information provided here.

Man that's some complicated stuff. I know too many people already say this but, I wish my future spouse and I were making enough money to worry about these sort of things.

I know older people that could see these higher income levels though. They already aren't happy about the thought of paying more taxes. And if we get a break this year and pay it the next year, that's nothing more than a loan.