Time for a break from AIG anger. Let's all direct a bit of our outrage at investment firm exec Robert Allen Stanford. 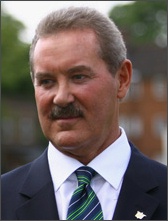 You remember my fellow Texan. He's the guy who allegedly committed, as the Securities and Exchange Commission put it, "massive, ongoing fraud" in the form of an investment scheme that centered an $8 billion certificate of deposit program.

SEC officials, in that fun way the feds have when they think they have the goods on someone, called Stanford's actions "a fraud of shocking magnitude that has spread its tentacles throughout the world."

Well now the IRS is getting in on the act.

IRS seeking unpaid taxes: The IRS has filed a motion to intervene as a creditor in the SEC case. The tax agency is seeking more than $226 million in unpaid taxes. That total breaks out as $110 million in the overdue taxes, $55.8 million in penalties and $60.7 million in interest charges.

The $226-plus million covers tax years 1999 to 2003. However, the IRS also wants Stanford to be forced to file a tax return for 2007. What might be due from that year is unknown, since  without any filed forms, the IRS can't compute exactly what Stanford owes the U.S. Treasury from two years ago.

Stanford's companies are not part of the IRS motion. The tax collector is focusing instead on the personal taxes of Stanford and his wife, Susan, with whom he filed joint returns for the years in question.

Marital tax matters: Please pardon a quick digression here as I wonder, just as I did in the Bernie Madoff Ponzi scheme, exactly what, when and how much the dear wifey knew.

And I'd be horribly remiss if I didn't remind all spouses to remember that, in the spirit of your wedding vows, your signature on a joint Form 1040 entitles you to the tax better of refunds and the tax worse of IRS audits.

Why the piggyback tax action? You might be wondering why the IRS decided to get involved in the SEC legal proceedings instead of just going after Stanford on its own. Or maybe you have a life and don't really care about the legal intricacies!

According to the tax publication Tax Analysts, the IRS had to file the motion to intervene because the district court's receivership order "enjoined all creditors from commencing or continuing any proceeding against the defendants."

But the IRS filing cites Section 7421, which states that "no suit for the purpose of restraining the assessment or collection of any tax shall be maintained in any court by any person, whether or not such person is the person against whom such tax was assessed."

Some questions of my own: While Stanford's alleged investment fraud and tax evasion is noteworthy, I have a few nonfinancial questions I'd like answered. 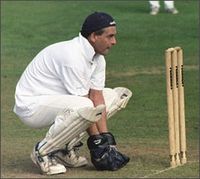 I find it amazing and intriguing that a guy from the tiny (pop. 6,533) Central Texas town of Mexia could be so interested in the arcane sport of cricket.

I'm from a small West Texas burg myself, and I have a lot of interests that baffle some of my family and friends. But cricket? Really? I'd love to hear his tale of why and how in the heck he picked up on this sport

Maybe Stanford will get the chance to organize the prison cricket team. Any film makers interested (using, of course, state film tax credits) in rights to -- and the editing of! -- The Longest Wicket?

Did you just use the phrase "arcane sport of cricket" ? Do you know how many countries play this game, and the viewership for each international cricket game ?

Stanford is such a weird guy. It's like he's trying to be Richard Branson, except exactly as British as Branson isn't.