And the bailout tax fun continues

Not to get your Friday off on an irritable start, but did you know that more than $221 million in taxes is overdue from 13 of the 23 largest recipients of Troubled Asset Relief Program (TARP) funds?

That's the word from the House Ways and Means Subcommittee on Oversight, which held a hearing yesterday on the state of federal borrowing and the use of taxpayer money. The timing was perfect, given that the same day the full House approved a "clawback" measure to recoup most of the bailout money used by AIG as employee bonuses.

The revelations from Lewis' subcommittee no doubt played a big role in the House passage of the bailout bonus bill.

Not naming names ... yet: The Oversight Subcommittee wouldn't disclose the companies that have not paid their taxes; privacy issues and all that. Somehow I suspect those identities will be finding their way into public view soon. 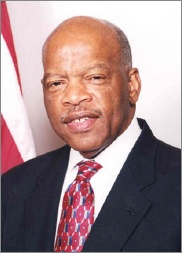 However, Oversight Chairman Rep. John Lewis (pictured at right) did release a chart detailing the amounts owed by "Recipient A" through "Recipient W" over the years.

And the Georgia Democrat had no problem castigating not only the anonymous tax-evading entities, but also the apparently shoddy review of such firms during the bailout money distribution process.

"To get money from Treasury, banks and others must sign a contract that states they have no material unpaid taxes. Treasury did not ask these banks and companies to turn over their tax records. Treasury relied on the signed statements when it agreed to invest billions of taxpayer dollars," said Lewis.

"“Are they signing contracts knowing that they owe taxes but thinking they will not get caught? Did then-Secretary Paulson turn a blind eye? Either way, this is shameful. It is a disgrace," Lewis continued in his statement before opening the hearing. "The American people are fed up, they are fired up, and they're not going to take it anymore."

Don't hold your breath: Recovery options include the usual IRS tactics of liens, levies and penalties. But that could take a while

Gene Dodaro, acting comptroller general for the Government Accountability Office, told the hearing that the IRS' "collection record isn't that terrific" in this area. While the IRS has the tools in place to collect this money, Dodaro said, Treasury and the IRS "really haven't had their program" to monitor compliance in this area "up and running yet."

After the hearing, the IRS released a statement: "The IRS has every expectation that these amounts will be paid and is committed to collect every dollar of taxes that are owed."

Hearing particulars and other coverage: You can check out the hearing notice at the Oversight Committee's Web page. There you'll find links to the witnesses' prepared testimony, which includes a GAO report (pdf) on "Status of Efforts to Address Transparency and Accountability Issues" in connection with TARP.

You also can read more at:

I'm not sure what's more absurd: giving tax dollars to companies that won't pay their taxes -- or collecting taxes from them and giving the money right back.