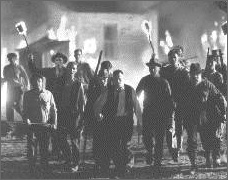 Put away your torches and pitchforks. Your outrage, along with a proposed but not likely to be enacted 90 percent tax on AIG bonus payments, has done its job.

It seem that the threat by Representatives to take back via taxes most of the AIG bonuses paid in federal bailout dollars was enough to get most of the insurance company's recipients to give the money back. That and New York Attorney General Andrew Cuomo's promise to name names of those who keep the money.

I was as mad as anyone at AIG and its hubris and Capitol Hill and its sloppiness. But as I said as the 90 percent "clawback" tax was being debated on the House floor, it's bad tax policy.

And there's the constitutional question. Laurence H. Tribe, a professor of constitutional law at Harvard Law School, fist thought the measure would pass court review. But he has had a change of heart, now telling Tax Analysts he has "growing doubts about the constitutionality of H.R. 1586's 90 percent AIG bonus clawback tax."

Political cover achieved: But the most important responses have come from the White House and Senate, both of which have taken a breath since the AIG fury erupted and the House bill was passed.

As is often the case legislatively, the Senate is more deliberative and, because its members have the luxury of six-year vs. two-year election cycles, less prone to public pandering.

In fact, from my years in Washington, working on both sides of the Hill, I've seen House members vote for a bill that might get them some good political mileage even thought they think it's bad legislation. The reason: They knew that the measure would die or be substantially changed when it got to the Senate.

But the House members, looking at an impending election day, still got to tell their constituents that they voted for it.

Patience prevails, for now: That's effectively going to be the case here. Senate leadership has said they aren't in any hurry to deal with the AIG bonus tax, either the House version or their own proposal.

Senate Finance Committee Chair Max Baucus (D-Mont.) told reporters he was looking "more closely" at his own proposal to impose heavy corporate and individual excise taxes on certain employee bonuses. The reconsideration came after President Obama said on CBS News' 60 Minutes that "you certainly don't want to use the tax code to punish people."

Similarly, Senate Majority Leader Harry Reid (D-Nev.) did not specify a time frame for the AIG bill. He did, however, note that Republicans are pushing for hearings into the legislation's potential impact, and that could delay any Senate bill's passage.

House happy: And today, House Majority Leader Steny Hoyer (D-Md.) said that the House-passed bonus tax bill seems to already have had much of its desired impact.

Hoyer cited the AIG executives who have agreed to return their share of the $165 million bonus money that triggered public and Congressional outrage.

"I think apparently the House bill had its intended effect. They’re giving it back," Hoyer said.

More anger at AIG: If you're just not ready to forgive and forget, here's another reason to remain angry at AIG.

Even in the wake of public outrage, the company is pressing forward with its lawsuit, funded in part with bailout money, against the IRS.

Even better is the tax issue at the heart of the lawsuit. AIG is fighting for the return of $306 million in tax payments, some related to deals that were conducted through offshore tax havens.

The IRS isn't waiting around for the case to play out. It is challenging some of the tax deals structured by AIG Financial Products Corp., the same unit that has caused political outrage over its bonuses.

Looks like the pitchforks and torches might have to come out of storage sooner than we thought.

I recently came across your blog and have been reading along. I thought I would leave my first comment. I don't know what to say except that I have enjoyed reading. Nice blog. I will keep visiting this blog very often.

Since when did it become the AGs job to pubically humilate people? It might have been during Spitzer's time....