What's wrong with the stimulus package

Everyone knows by now that the Senate approved its stimulus package. I haven't written much (any) on it or the previously approved House version. 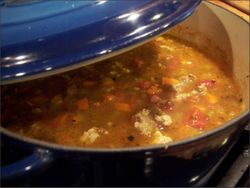 Why not? Because this stew is still simmering and a lot of cooks will be stirring it in the next few days.

As noted in every report on the stimulus packages, the House and Senate have different ideas about what's needed. Some things from both proposals likely will be changed or eliminated altogether. So I'm not getting too excited about what a final bill will or won't do until there is an actual final bill.

That said, I couldn't resist this headline from Citizens for Tax Justice: The Six Worst Tax Cuts in the Senate Stimulus Bill.

"The economic stimulus bill that the Senate approved today includes several tax cuts that are not in the stimulus bill approved by the House of Representatives two weeks ago and which should be excluded from the final bill that goes to the President," write CTJ analysts.

The nonprofit public research and advocacy group also takes to task the "self-styled centrist Senators" who "put forth a compromise that took exactly the wrong approach to cutting down the costs: They mostly removed government spending that economists believe will stimulate the economy — like aid to state governments, school construction, food stamps — while they left in most of the regressive tax cuts that Senators have added to the bill."

The six tax cuts that have got CTJ so riled up are:

You can read CTJ's executive summary of its issues with these proposals here and the organization's full report here.

Complaints aplenty: CTJ isn't the only group unhappy with either or both bills. Many state lawmakers (those, for example, in Wisconsin and New York) wanted more help from Uncle Sam.

The stock markets tumbled, although to be fair, that drop was mainly due to unhappiness with Treasury's latest banking sector plan.

And there remains, of course, the usual politically partisan bickering.

Yep, this is going to be one fun conference committee.

Hi Kay,
India's interim budget is to be announced coming Monday - Feb 16. Fun times indeed in taxland, we are waiting to see what we get. Unfortunatley, policies may not be able to fully bring back the economy to an upbeat state.
PS: DId you get my email, will really appreciate your go ahead as regards your quotes.
Best
Lubna