Over the weekend, the chances for a stimulus package relatively soon improved greatly. A group of Senators met on Saturday to devise that legislative body's answer to the previously passed House bill.

But there's much work to be done. And it looks like the original deadline of having a measure signed by Obama by the Presidents Day holiday probably won't be met.

The reason: There's still lots of political sniping going on, not only between Democrats and Republicans, but also within the parties. Some of the down-and-dirty details are chronicled in U.S. News' Political Bulletin.

Now I'm not saying that politicians need to act or react based upon opinion polls, but a Gallup survey conducted late last week is interesting. The polling group found that most Americans lay the blame for the legislative gridlock so far on Republicans. 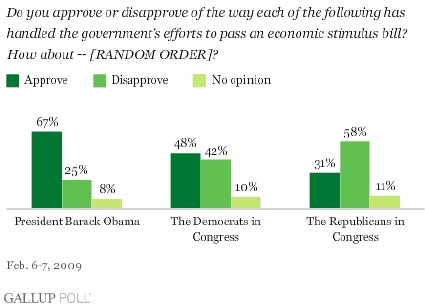 As Politico's Glenn Thrush notes, "One poll isn't the story, but this seems to cut significantly against the Dems-in-trouble storyline" that some in the GOP have been pushing.

The Republicans also seem to have lost, at least for now, the backing of a traditional constituency.

Elsewhere on Politico, David Rogers reports that Sen. Arlen Specter (R-Pa.), in announcing his support of the Senate stimulus package, "pointedly read from a Chamber of Commerce endorsement. The National Association of Manufacturers has also weighed in, telling Republicans that votes on the bill  'including potential procedural motions' may be considered for designation as key votes in NAM's scoring of their legislative record."

Again, our lawmakers shouldn't govern based upon which way public opinion winds are blowing. But we do have, theoretically, a representative government, which means that the men and women on Capitol Hill serve, as the saying goes, at our pleasure.

It's time to quit using our down and almost out economy as a purely political tool. Every day, more Americans of every political persuasion are losing life savings and jobs. Members of Congress need to step up now or they, too, can join the unemployment ranks.

If Congress, on either side of the aisle, wanted to make a useful and popular change in the federal tax laws it would be to stop taxing unemployment compensation. Benefits are typically so temporary and small, taxing them seems petty and callous.