What's the answer to our economic woes? According to James K.Galbraith, it's government spending.

Uncle Sam needs to spend now. Spend a lot. Then spend some more. 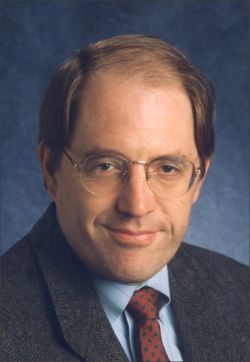 In the Feb. 16 issue of Fortune magazine, Galbraith, a professor of government at the LBJ School of Public Affairs at the University of Texas, voiced his support for "a very, very big stimulus package."

"Every previous recession in my professional life has been a shock to a reasonably healthy system," Galbraith told the magazine, "This is a general collapse of the core funding mechanism all across the country, and you don't know what the scale of the base case will be. The task is to come up with a large enough program to get ahead of this unknown tsunami coming our way."

That's why Galbraith supported the original $850 billion stimulus package proposed in January. The version eventually passed by the House was whittled down slightly to $820 billion. Earlier today, a group of Senators came up with a version that carries an $827 billion price tag and must be approved by the full panel next week.

Then the real legislative fun will begin.

House and Senate negotiators will have to hammer out a combined version in a conference committee. Then they have to get both bodies to sign off on that plan. That won't be easy, as there are some basic disagreements about aid to states and local governments, education, health, renewable energy programs and, of course, taxes.

We'll have to wait and see if the joint legislative sausage making will produce a product the economy will find palatable.

Economic downturns then and now: The Fortune article has a nifty info box that underscores the article's title, "Galbraith on the Crash … It Has a Familiar Ring." 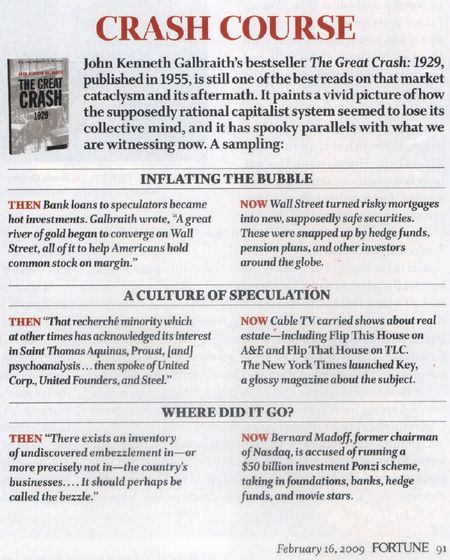 If you're reading via an RSS feed and you don't see the "Crash Course" box, click here. If you're at Don't Mess With Taxes' home page and would like to see a larger version of the image above, you can click there (or here), too. Once that new page opens, a click of your mouse will make it bigger, or at least that's what happens in my browser.

And somewhere, the ghost of poet and philosopher George Santayana is shaking his head and muttering, "Those who cannot remember the past are condemned to repeat it."