The good news about the Making Work Pay credit, a key provision of the just-enacted stimulus bill, is that it will be showing up in paychecks sooner that most of us expected.

As I noted earlier, the IRS knew delivery of the credit money was going to be via paychecks well before it passed. That gave the agency a head start in getting the distribution method ready so that the money would be in taxpayer hands quickly.

Well, the IRS' efficiency in this case has impressed me.

In an announcement posted at the agency's Web site today (yes, on a Saturday), the IRS notes that the new withholding tables that will result in more take-home pay for workers are ready. Today. Now.

"For most taxpayers, the additional credit will automatically start showing up in their paychecks this spring," said IRS Commissioner Doug Shulman. "Since employers and payroll companies will handle this change, people typically won’t need to take any additional action. The IRS will continue working to implement this and other provisions of the new law as quickly as possible."

But that also leads us to a bit of bad news.

Since the credit will start appearing earlier, the amount per pay period will be less than the $13 a week talked about immediately after the American Recovery and Reinvestment Act of 2009 became law.

Now, however, the $400 credit will be spread out over more months, meaning you'll see just a little bit more in your pay envelope sooner. And the operative phrase is "a little bit."

Some people aren't too thrilled with this tax credit delivery method. They've been spoiled by previous tax breaks that were distributed as separate checks. 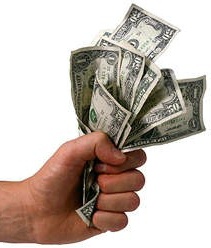 I had one guy complain that all such a paltry amount would do would be to let him spring for a Big Mac dinner each week for he and his girlfriend.

Well, sorry Big Spender, but that's exactly what Washington, D.C., wants you to do with that money.

When the last round of rebates went out in 2008, many folks paid off bills and otherwise used the lump sum to cover necessities, such as utilities and groceries.

A few were able to save at least some of the extra cash.

Stimulus, smimulus: Good for them, but as you can see from the current dismal fiscal data, those rebates didn't do squat to stimulate our economy.

So lawmakers are hoping that seeing more in paychecks, even just a few dollars more, will make people feel like things aren't so terrible and that they might can spend at least some of their hard-earned money.

To be honest, I'm not sure it will work. But neither did the rebates, and they cost us millions to distribute. At least we won't have that needless expense to pile onto our ever-growing federal deficit.

Employer, employee tips: If you're an employer, the IRS says the new withholding tables, along with other instructions related to the new tax law, will be incorporated in new Publication 15-T. The IRS will post the updated publication on its Web site next week. It also will mail the document to more than 9 million employers in mid-March.

The IRS asks that employers start using these new tables as soon as possible, but not later than April 1. Most workers will see a boost in their take-home pay soon thereafter.

If you're an employee, you don't have to do anything but wait for the change to show up in your paycheck. Don't worry about filing out a new W-4 withholding form.

And if you're making a good salary, you might not see any change or only a very minimal one.

The Making Work Pay credit is phased out for a married couple filing a joint return who have modified adjusted gross income between $150,000 and $190,000. Single (including head of household and married fling separately) taxpayers will see the credit reduced if their modified AGI is between $75,000 and $95,000.

So basically. only those that don't need the credit will get it? Am I reading this right, the upper class will get this credit?

One correction to the idea that you don't have to do anything, at least for one group of taxpayers: people with non-wage income whose AGI is more than the phase out amount. I am single and my AGI will be just over $95,000--but I am getting an extra $20 in my bi-weekly paycheck anyway because my taxable wages are about $80,000. I'll make up the difference with a higher tax liability next April.

That isn't all bad--my withholding has been assuming investment and it was too high last year from all the investment losses. But don't think you got a tax cut just because your paycheck increased if you have investment income.

Let's say I'm married, I file jointly with my spouse, and I have two jobs. If all our employers use the new tables, could we potentially end up with an additional tax obligation of $1,600.00 or more when we file? As an employer, I must make sure all my employees understand this problem and adjust their W-4's appropriately now, and every time the tables are changed. Easy for the IRS but not so easy for us.

Chris,
Did you get an actual raise from your employer? If not, the $10 you're seeing is the Making Work Pay Credit. It just means that less tax is coming out of your pay. It's not new money that you'll owe tax on.
Kay

Ok about this case... I've filed my 2008 tax return & I'm estimating my 2009 taxes. In my estimation I suppose to get $0 back for 2009 based on the new income levels for the different marginal tax rates, deductions & exemptions. Then I get my first check based on the new witholding tables which shows a $10 increase. Does that mean I'll owe the amount = ($10)x(# of pay checks) for 2009?

Since my paycheck is deposited directly into my savings account, I doubt the extra money each pay period will actually be spent.