For some folks, the fact that Friday the 13th falls just before Valentine's Day is appropriate.

Too many people rely on sheer luck to make their relationship with a spouse or significant other work. Take it from me, a person who's spent the last 30 years, most of them married, with the same person, it requires a lot of work, not just good fortune or hearts and flowers, to make it last.

And for most folks, the hardest task is finding a way to work together financially.

That's particularly true in these financial times. Many couples who have relied not only on each other, but each other's paychecks, are now struggling to make it on one income.

The hubby and I have gone through patches where one of us was out of the workforce for a while. It wasn't always fun, but we made it.

Living and loving on less: Single salary survival can be done, but again, whether you're a one-income family by choice or otherwise, it takes work, not luck.

Keeper of the Cheerios has some tips for living on one income.

One key to living on less, says The Happy Housewife, is to dump the debt.

The Simple Dollar takes a look at one of the many books out there offering advice on living well on one income.

How to live well on less also is examined by Oh My Aching Debts.

A consistent theme in all these pieces of advice is cutting back on unnecessary expenses.

One such spending reduction this year just might be that expensive Valentine's Day gift you're considering. Reconsider.

You can make it through Feb. 14 without going overboard. That's the message from Savvy Frugality, who explains Why I Don't Celebrate Valentine's Day.

Cupid confronts the economy: Folks still might be buying their true loves gifts for Valentine's Day, but they're spending less, according to a recent survey.

The National Retail Federation's 2009 Valentine's Day Consumer Intentions and Actions survey, conducted by BIGresearch, found that consumers plan to spend an average $102.50 on Valentine's gifts and merchandise, down from last year's $122.98 per person.

"This year more than ever, consumers will look for creative and inexpensive ways to show those they love how much they mean to them," said NRF President and CEO Tracy Mullin. 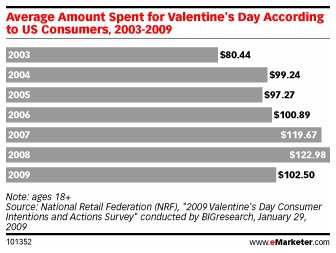 But even at a reduced rate, total Valentine's Day 2009 spending is expected to reach $14.7 billion.

Any day is Valentine's Day: As for the hubby and me, we have our own loving, but money-saving, holiday gift routine. We'll definitely exchange cards. I'm a sucker for the sappy one he always gets, and then counters with a second humorous one.

But as for extra spending, that's not going to happen. We'll enjoy each other's company tomorrow as usual. Then the next time we do dine out, we'll note that it's our Valentine's Day celebration.

That way we not only avoid an extra expense based primarily on an arbitrary calendar date, but we get to make Valentine's Day romance last a little longer.