The biggest cheers for movie-making tax breaks obviously come from film makers. But some states still give the special benefits good reviews, too.

And while the idea of state tax breaks for specific industries is not new, the decision to lure movies to states by offering tax incentives is getting renewed attention. 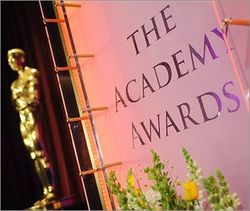 Part of the interest is the annual Oscars ceremony. I admit that last year I was pleased that a couple films, including the Best Picture Academy Award winner "No Country for Old Men," filmed at least a few scenes in Texas.

But more that bragging rights and tourism enticements are at stake. Many states, struggling to bring in any new revenue, believe that tax benefits for film companies is good public and fiscal policy. The idea is that to get money, you have to give up some.

The question is, just how much is such a trade-off worth?

The AP story looks, in part, at Ohio's efforts to woo production companies. The Buckeye State, says the wire service, "is one of only a handful of states left that don't already offer a state-level tax break to filmmakers or a giant pot of cash that producers and directors can tap for incentives."

Benefit or bust? But do such tax breaks really bring in that much additional cash for the states?

A review of tax benefits offered by New Mexico by Ernst & Young found that 30 films produced in 2007 in that state generated about $253 million in spending and directly created 5,989 jobs.

An analysis by the nonprofit group Film Wisconsin, a nonprofit group, released a study last December indicating that new tax breaks and incentives there brought in more than $9.2 million and created at least 850 jobs.

Of course, numbers can be evaluated many ways. Joe Kristan of Roth & Co.'s Tax Updates notes that in some cases, filming doesn't pay off as expected.

I suppose when many state lawmakers feel like the crew on the real Titanic rather than the film version that racked in all those golden statuettes and box office cash a few years ago, any tax port is welcome in a fiscal storm.

Tax breaks is tax saving,where in tax exemption is included which refers to all or certain taxes of a state or nation in which part of the taxes would normally be collected from an individual or an organization are instead foregone.For me I think it is a benefit.

I don't think any states are going to develop a thriving film industry because they keep paying people to film there (http://www.taxrascal.com/does-the-movie-business-deserve-californias-tax-money/246/). That just leads to a situation where movie producers play states against one another for subsidies.