Racing, cars and taxes, oh my!

Helio Castroneves has found maneuvering the federal court system a bit more challenging than the race tracks with which he's more familiar. 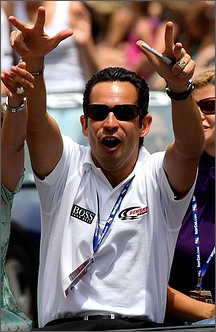 The two-time Indianapolis 500 winner has been charged with plotting, along with his sister and an attorney, to evade taxes on approximately $5.5 million in income. Last week, he headed to federal court in Miami to seek dismissal of the charges.

U.S. District Judge Donald Graham, however, black flagged the request. Another hearing on more pretrial motions is scheduled for Monday. The trial itself is set to start on March 2.

Federal prosecutors allege that the Brazilian racer and his colleagues created a "deferred royalty plan" that sent licensing payments to a company in the Netherlands via a Panamanian shell company.

The ever ebullient Castroneves, whose personality was a big part of his off-track success on TV's "Dancing With the Stars," didn't let the ruling get to him. After last week's hearing, Castroneves said that the more he sees of the government evidence, the more confident he is that he will be cleared.

You can read more on Castroneves' tax charges and the hearing in WebCPA, the Miami Herald and Sports Illustrated.

Taxpayer financed MVP auto: Another car and tax controversy is getting attention, but this one is completely legal.

The headline from The Truth About Cars says it all: Super Bowl MVP Receives $85k Taxpayer-Funded Caddy.

As has been the case for the last eight years, the big game's biggest player received the Cadillac of his choice. Pittsburgh Steelers' Santonio Holmes decided on Caddy's priciest SUV, an $85,000 Escalade Hybrid Platinum.

Good for Holmes for going relatively environmentally friendly. But the bottom line is that GM gave a millionaire athlete an $85,000 vehicle just weeks after the federal government handed over billions in bailout money to struggling U.S. automakers.

Sensing that the giveaway might not be the best PR move, GM decided to forgo the usual onfield presentation.

"Given the current business environment, it was much more appropriate we not do that," Cadillac spokeswoman Joanne Krell told the New York Daily News. "We made the decision not to actively participate in the Super Bowl. We congratulate the MVP, it is a great achievement. We are very sensitive to the federal assistance loan we have received and we want to carry on our fiduciary responsibility. We will live up to the contract we negotiated."

Gentlemen, start your engines: The 2009 NASCAR season officially starts next week, but the cars have already been circling Daytona International Speedway. Tonight 2008 pole winners will take the track for the Bud Shootout.

The start of any new sports season is great. Your favorite team has just as good a chance, at least theoretically, as any other to win the championship.

My latest Crazy Woman Driver column basks in that feel-good glow, focusing on the accessibility of NASCAR stars. Read it quick, before some on-track incidents and incomprehensible decisions by NASCAR brass send me back into my typical ranting mode!

And you can catch up on my previous columns here.