Good news in 2009! The hubby got a pay raise. And judging from my e-mails, so did some other folks. 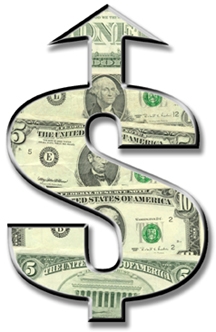 But the little bit of extra coin didn't come from the usual or expected source.

It showed up in the first paycheck that my wage-earning better half got this year. When I first looked at the slightly larger amount on his pay stub, my initial thought was that he got his annual raise a bit early.

Then, after doing the per-pay-period math, I wondered what kind of cheap so-and-so's does he work for!?

I took a breath.

Maybe it was a holiday or year-end bonus delivered a bit late. That made more sense considering, as I noted, the relatively small amount of added income.

But the hubby swore that neither scenario was the case.

Then it hit me. The extra pay is from Uncle Sam.

When inflation is a good thing: Inflation adjustments that took effect on Jan. 1 mean that, for many folks, a little more of our money is in a lower bracket.

Similarly, the wider tax brackets mean that, with our progressive tax system, more of your money also is taxed in the lower 10 percent and 15 percent brackets.

What these annual inflation bumps mean for the average taxpayer is a little more money. It's not that big of a difference, but every little bit helps, especially in this economy.

Retirees get more, too: A quirk in the Social Security Administration's regularly scheduled cost of living adjustment has meant even more money this year for folks who get those benefits.

Beneficiaries can thank the oil industry for their bigger checks.

You can read more on the Social Security adjustment in this Forbes story.

Hey a raise is a raise and if everyone puts the difference on their high interest debt or straight into their IRA/401K then it could make a big difference.