For better or ... apparently just better

I have been married a long time. In fact, when the hubby and I celebrated our last wedding anniversary, it meant that we've spent more of our lives married to each other than we ever lived as singles.

It's been mostly great, but, as with every relationship, there were some downs to go along with all the fun ups. That's cool. We both took that vow about for better or for worse seriously.

Now I'm not so young (obviously!) or naive as to believe that every marriage can weather every storm. I know that sometimes that other part of the ceremony, the one about not letting anyone put asunder the matrimonial bonds, has to be disregarded. It's often sad when that happens, but life goes on, hopefully better for both partners.

But today I was floored by an article in the New York Times about some women who apparently just want all the relationship roses -- and more -- without any of the thorns.

"It's the Economy, Girlfriend" looks at a group of women who date or are married to bankers. These women are having particularly difficult times right now because the recession is wreaking havoc with the financial sector.

And that means their relationships and, more importantly in some cases, their lifestyles are taking hits.

Not only are the banker boys real buzz kills now because their jobs suck or are nonexistent. But the money isn't flowing like it once was. And these chicks are not pleased at all.

DABA Girls: So they've formed their own support group, Dating a Banker Anonymous (or DABA), and meet once or twice a week for brunch or drinks at a bar or restaurant. There, reports the Times, they can comfort each other.

Take, for example, the 26-year-old newlywed who, according to the article, said the downward-trending graphs began to make sense to her when her 28-year-old private wealth manager husband stopped playing golf, once his passion. "One of his best friends told me that my job is now to keep him calm and keep him from dying at the age of 35," the bride of three months told the Times. "It's not what I signed up for."

Blogging their blues, too: It gets worse. They also have a blog, where they can share their tales of woe, "safe from the scrutiny of feminists."

I am not kidding. That's what it says. Read the intro yourself:

Are you or someone you love dating a banker? If so, we are here to support you through these difficult times. Dating A Banker Anonymous (DABA) is a safe place where women can come together – free from the scrutiny of feminists– and share their tearful tales of how the mortgage meltdown has affected their relationships. DABA Girls was started by two best friends whose relationships tanked with the economy. Not knowing what else to do, we did what frustrated but articulate girls have done since the beginning of time - we started a blog. So if your monthly Bergdorf's allowance has been halved and bottle service has all but disappeared from your life, lighten your heart with laughter and email your stories to dabagirls@gmail.com. Warning all stories sent will be infused with our own special brand of DABA Girl humor.

I had to look up bottle service; yet another difference between me and the self-named DABA Girls. And I'm hoping that some of these women have their tongues planted at least partially in their well made-up cheeks.

But I fear that many are sadly serious about the personal affronts they and their now less well-heeled menfolk are facing during the economic downturn.

And I don't mean to dump totally on the women. It's just that they started DABA and talked to the Times about it. But I agree with my blogging and Bankrate colleague Holden Lewis, who lent a male perspective via a Twitter conversation some of us had about DABA by noting that the banker's "vow included the words 'as long as she's a Size 2 or smaller,' and hers include 'as long as he is rich.'"

Divorce's taxing considerations: The one good thing about these DABA relationships is that at least some of them are still in the just dating phase. Breaking up then is much easier and less costly. 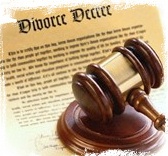 When divorce is the answer, as I fear it might be for some of the banker pairs, a whole 'nother set of financial, and tax, considerations come into play.

As I note in my book, "The Truth About Paying Fewer Taxes" (which you still have time to win!), among divorce’s many and varied consequences are changes to your tax life.

Your filing status will be different. Remember that your legal marital status on Dec. 31 determines the whole tax year’s filing status. If you’re married 364 days but your divorce decree is final on Dec. 31, then you’re single (or head of household if you got custody of the kids) for the year.

In some cases, couples decide to change their filing method from joint to separate even before the officially split. But that could be costly, so put aside your animosity and run the numbers.

Then there are assets and how they might factor into your tax considerations. For example, if you sell the house as a jointly-filing couple beforehand, you can pocket up to $500,000 in profit (if your real estate market and home equity situation are still OK). But if you get the house in the divorce and then sell it as the sole owner, you’ll only be able to shelter half that amount.

And as for those previously mentioned kids, the issue of dependents – who gets to claim them and any associated tax breaks – can have a dramatic effect on your taxes.

So if your marriage is on the rocks, be sure to take not just the emotional price into consideration, but also the fiscal and tax costs of divorce into account, too. Get the appropriate advice for each case.

This article I wrote for austinwoman also has some divorce and money tips. And, as I mentioned, so does "The Truth About Paying Fewer Taxes." And thanks for your indulgence of my blatant self-promotion; my publisher and I appreciate it!

Love the article, and the nerve of these women!

Let them eat cake I say.

Here's an article that was on the front page of Yahoo news, looks like these women aren't getting much fanfare from the public.

What a time we live in when her size and his bank account are what matters. At least they both know what they're doing together. Pretty sad.