"Heaven for the Godless?" "Curbing Credit Card Predators." "Why We're Still Happy." And my favorite: "Stop Being Stupid."

But since the ol' blog's bread and butter is taxes, I'm directing your attention to "The Gas Tax."

The paper's editorial writer argues that the only way to make the auto bailout work is to ensure that motorists purchase the fuel-efficient vehicles the car makers must build in order to keep the federal money.

The worry is that as long as gasoline stays below $2 a gallon, we'll all go back to our profligate driving ways. That's probably a good bet.

As a nation, Americans tend to be very reactive. When gas was very expensive not so long ago, we quit driving as much and/or traded our gas guzzlers for economy cars.

But, being a relatively young country and too often acting like irresponsible teenagers, it wouldn't be a big surprise to see us all out, as we used to say in my small hometown during the '70s before that decade's fuel crisis, dragging main, wasting both time and fuel.

The big question now is, do we really need a paternalistic government to keep us from hurting ourselves? Can't we just grow up and do a bit of long-range, adult planning, at least when it comes to our vehicles? Of do we indeed need to feel the pocketbook pinch, either from OPEC or Uncle Sam, to change our driving and vehicle styles?

Sadly, I think the NYT editorial writer in this instance is right. Case in point from the column: "It took a gallon of gas at $4.10 to push the share of light trucks down to 45 percent in July. But as gasoline plummeted back to $1.60 a gallon, their share inched back up to 49 percent of auto sales in November."

The map below, which you can click for a larger (and clearer) image (or here if you're reading via feed), offers a bit of a preview. 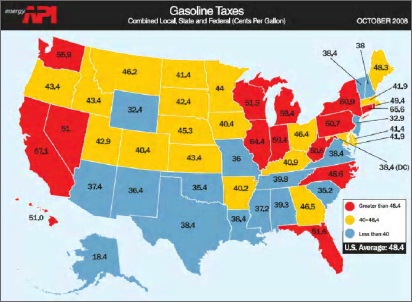 When API updates its information in a few weeks, we'll let you know here on the ol' blog how much in fuel taxes you're paying.

Some hybrid tax breaks still available: Of course, if you are who, because of fuel prices, taxes or environmental concerns, has decided to make a change, an obvious choice is

And Uncle Sam is still offering you some tax incentive for going this route. By buying an eligible hybrid by Dec. 31, you can get a tax credit on your 2008 tax return.

Unfortunately, the most popular hybrid, Toyota's Prius, will not be of any tax benefit. The law (and lawmakers) that created this tax break decided to punish car companies for being forward thinking, making well engineered cars and being successful in selling them. Once a manufacturer sells 60,000 hybrids, the tax credit phases out. The Prius, and its fans, were the first to pay this tax price.

If you're a Honda fan, a couple of that Japanese automaker's hybrids will still get you a bit of a break. But those credits disappear, too, come Jan. 1, 2009. So hurry is you want a hybrid Accord or Civic. Details on the credit amounts can be found at this IRS Web page.

American automakers came late to this party, but that means that their hybrid vehicles -- and more have been approved the IRS over the years -- afford you the largest (and soon only) tax credits.

The IRS keeps a running list of eligible vehicles and their credit amounts on this Web page. Just scroll down past the text for the tables.

Belated Xmas greetings. Wishing you and your loved ones a great 2009.

The tax would force us to use less as a country, but how would that tax money be used? If it's used to get us off of oil dependence or reduce it (public transit for example) then good.

Bailouts hurt everyone. The only way to make the bailout work is to not have it.

If we tax ourselves we'll just be subsidizing the rest of the world's consumption by keeping their prices down more.