Still time to save on autos & taxes

If you really believe gasoline will continue to cost around $1.50 a gallon, give me a call. I have a personal bailout package you might be interested in funding.

Sooner rather than later, OPEC is going to say "enough" and do what it takes to push pump prices up again. They may not reach $4 a gallon again, but they likely will be at least double what we're paying now. And there is some sentiment to add to our fuel costs via increased gasoline excise taxes.

So if you've got some cash to spare, it might be a good time to trade in your gas guzzler for a more fuel-efficient auto. 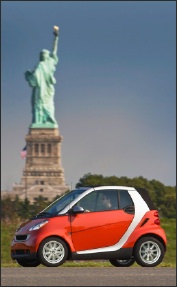 Locally, we're seeing a lot of ads from the U.S. automakers, promising a combination of rebates, low-financing deals and that they'll still be around to help you keep your car running.

Even some luxury car companies are getting in on the act. Mercedes-Benz is touting a 3.9 percent loan rate for "qualified buyers." Of course, that rate is for Mercedes' larger vehicles, not its ultra efficient (and ultra tiny) Smart car (pictured there on the right).

As appealing as it might be to own any type of Mercedes, a Smart is just too small for me, especially here in Texas. No, not just because of the Lone Star State's obsession with over-sized everything, but because 70 mph (or faster) is the going speed on many of our highways. One pass by an SUV or even a medium-sized sedan, and I fear the Smart would be literally blown off the road!

But there are plenty of more typically-sized fuel-efficient autos out there and, in some cases, Uncle Sam will help you make the purchase.

Tax help for hybrid purchases: I'm talking, of course, hybrids. These vehicles are what General Motors and Chrysler are going to have to focus on to keep their federal loan money. And many of their currently produced hybrids qualify for the alternative fuel tax credit, for 2008 filings and beyond.

If, however, you prefer a Japanese vehicle, tax-saving time is almost over. The tax credit for Toyota's Prius is long gone and on Jan. 1, the tax break for Honda's hybrid Accords and Civics also disappears. If you want one of those, along with a nominal tax credit when you file your tax return, you better head to your Honda dealer today or tomorrow.

As for the rest of the tax-credit eligible autos, check out this running list (tables below the text) that the IRS maintains.

Happy, and cost- and fuel-efficient, motoring!