Today, our Year-end Money Moves feature focuses on things you should do now to enhance your retirement earnings. 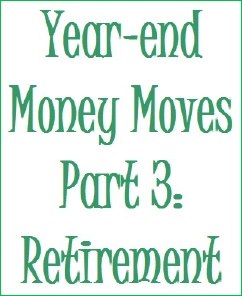 This is Part 3 of our series. Part 1 covered tax tasks; Part 2 looked at imminent actions in connection with your investments. As noted in those earlier posts, there is tax crossover in all these categories.

And now, since every passing moment moves us closer to our eventual retirements, let's look at some moves you can make by this Dec. 31st to help make your future retirement years truly golden.

Contribute to your company plan
The current economy has prompted many folks to stop contributing to their retirement accounts. Some have even felt compelled to raid their nest eggs to make ends meet today.

However, if you can, you should leave your retirement accounts along and, if possible, continue to contribute. This is especially true if you have a workplace retirement plan, usually a 401(k) or 403(b) if you're a public employee, and your company matches a portion of your contributions.

If you don't take advantage of the company match by contributing at least enough to get your employer's money, you are passing up free retirement money.

Contribute to your IRA
Similarly, some folks have neglected their IRAs during this downturn. I agree, it's hard to put money into an account that's gone down in value. But if you are convinced that the funds are the appropriate ones for your retirement savings, the lower share costs mean you're getting a value right now.

The advantages of a Roth are well known:

Some people, though, still contribute to a traditional IRA, usually so they can claim a tax deduction or because they make too much money to contribute to a Roth. Review your personal situation and determine which IRA is best (or available) for you and contribute now.

Move your IRA money
If you think your IRS account is a real stinker, the good thing about an IRA is that you can move it -- by direct trustee to trustee transfer, of course -- and not worry about paying taxes on the money.

If you changed jobs or even were laid off in this downturn, you might want to take your retirement account out of your old employer's control. Again, the best tax move here is to directly transfer the money to another qualified retirement plan, either at you new workplace or an IRA.

This Phoenix Companies Web page has the scoop on rolling over retirement funds.

Take your required distributions
Remember those RMDs mentioned just a bit earlier? Here's the "more" that was promised.

If you have a traditional IRA or 401(k) and you turned 70½ in 2008, you're going to have to take some money out of your tax-deferred accounts … maybe.

Tax law usually requires older owners of certain retirement funds to take out a certain dollar amount so that Uncle Sam finally gets his cut of the earnings that have been growing tax-deferred over the years.

But with the stock market's recent quasi-crashes, there's concern that the account value that some taxpayers will be forced to use to figure RMDs will mean that they will have to take out more than they would have if the calculations were run on today's lower valued accounts. So there's a move afoot to waive the RMD and/or penalty for not taking it in 2008 and/or 2009. If and when this will happen is still up in the air.

During this lame duck session to consider a U.S. auto industry bailout, lawmakers decided to fiddle with a few other items. Last night, the House approved a pension bill that, in part, provides RMD relief for the 2009 tax year. It's now in the Senate's hands.

But what about 2008 RMDs? There's talk that Treasury might just issue a ruling that would take care of things for those folks. There's also pressure being applied to Treasury in this regard by members of Congress and advocacy groups.

So if you're facing a Dec. 31 deadline to take an RMD, my best advice right now is to hold off for a bit longer if you can. Maybe in a day or week or so this will be a bit clearer.

Consider converting to a Roth
If your adjusted gross income is less than $100,000 and you have a traditional IRA, look into converting it to a Roth IRA.

You don't have to switch over your whole account; you can move just a portion of the money. It might make sense if your income is lower this tax year so that the taxes you'll owe on the move won't be so much.

Even if you don't qualify for a Roth conversion now, make a note to do so in 2010. That year, thanks to the Tax Increase Prevention and Reconciliation Act of 2005, any traditional IRA owner will be able to convert the account regardless of income. So you can make nondeductible contributions now and in 2009, and then convert the funds in 2010 and beyond.

Once again, however, your IRA's value might have more bearing on this decision than your tax considerations. There are some interesting conversations and scenarios on converting a traditional IRA to a Roth account in a down market in this Morningstar forum.

Open a self-employment plan
If you work for yourself, either full-time or as a side job to supplement your working-for-the-man wages, you can contribute to a retirement savings plan covering these earnings.

While some options allow you to delay opening a self-employed retirement account until next year's filing deadline plus any extension, others (e.g., a solo 401(k) or Keogh) must be set up by Dec. 31.

These self-employment retirement savings options that have the year-end deadline generally allow you to save much more, so don't miss out if this situation applies to you.