President-elect Barack Obama held his first press conference as the incoming leader of the United States. 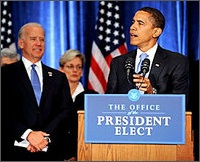 According to the live blogging report from the L.A. Times Top of the Ticket, he very briefly, and vaguely, discussed the current economic crisis.

He was equally noncommittal on tax specifics. "I think that the plan that we've put forward is the right one," Obama said. "But, obviously, over the next several weeks and months, we're going to be continuing to take a look at the data and see what's taking place in the economy as a whole."

That's OK. Yes, promises were made, but I'd rather have them met appropriately, both from the type of tax action taken as well as the timing of it, than have some money thrown at the problem as a political sop.

Your urgent attention, please: And Obama didn't specifically address the 13 "urgent issues" that the Government Accountability Office (GAO) says will need the new president's immediate attention as soon as he takes the oath of office in January.

The GAO is the investigative arm of Congress and thanks to amendments to the Presidential Transition Act in 2000, the agency is considered a resource to incoming administrations. Specifically, the  GAO is to serve as a source of briefings and other materials.

To that end, the GAO has identified 13 matters it says require urgent attention and continuing oversight "to ensure the nation's security and well-being." Listed alphabetically, they are:

As big a vidiot as I am, I still am not sure that the digital television transition is among the country's top concerns. But then, the GAO probably knows something in this regard that I don't.

"With the serious challenges related to financial markets and the economy, the financial crisis facing the nation, two wars under way, and the first transition since 9/11 and the creation of a Department of Homeland Security, this is absolutely a unique time," said Dodaro.

"GAO has combed through all of our recent work to help identify where our work can help address urgent challenges facing the nation now, to assist new appointees in every agency zero in on the challenges of that particular agency, and to help identify areas with the potential to save the nation billions of dollars."

The GAO also has launched a new Web site that it says should help Obama appointees, who have "limited time to learn about their new positions and the challenges that come with making a successful transition from campaigning to governing."

The online resource is also open to the rest of us who have no plans or hopes of serving in the Obama Administration.