Even in the toughest of times, some corporate ideals remain firmly entrenched. Like, for example, spending company money to put the firm's name on a sports stadium.

Not only is there the built-in advertising, both print and every time an announcer mentions the place, but company bigwigs get a choice suite in which to entertain clients and ignore the feats on the field. (That Miller High Life commercial in "Section La-di-dah" got it so right.)

But sometimes things go horribly wrong, for the companies and teams, corporate employees and fans. Remember the Astros used to play in Enron Field. Neither the team nor the firm could get out of that deal fast enough!

Now the Mets are facing a public relations crisis in connection with their new stadium. The New York baseball club is planning on throwing out their 2009 season's first pitch in Citi Field. Will that still happen? 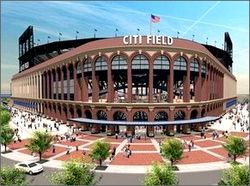 Bailout naming rights? The struggling Citigroup has announced its 20-year, $400-million naming deal for the Mets new stadium is still in place.

But that contract was negotiated before Citigroup admitted that it was in deep doo… fiscal trouble.

And before Uncle Sam -- that is, your and my tax dollars -- once again rode to the rescue of a poorly run bank.

Or, as Economist's View explains it:

Matt at Fanhouse doesn't think very much of Citigroup's decision to spend millions to have its name on the Mets' new stadium while firing more than 50,000 employees to save money

Apparently Matt has lots of company, even in the Mets' hometown. Reuters reports that a recent man- and woman-on-the-street survey found that the Citigroup bailout is being slammed by many New Yorkers.

Time for a new name? The Hot Stove Report at MLB.com, however, cautions fans not to become too attached to the name Citi Field.

The park could conceivably have a different identity even before it opens in April. The struggling economy could force all sorts of re-evaluations. A change also would be likely if Citigroup is eventually taken over by another institution.

In the meantime though, there's the current plan to use a name now associated with corporate malfeasance and taxpayer dollars. So what's a better moniker for the Mets' new playing field?

The current, albeit anecdotal, favorite appears to be some form of "Taxpayer Field."

That title at least recognizes each U.S. taxpayer's commitment to the company's bailout if not the Mets baseball club. It's also the choice of two Staten Island councilmen, who concede a bit to the original deal and would share the name a la Citi/Taxpayer Field.

"Perhaps a name change is in order, since it will be the taxpayers of the country who will foot the bill for not only part of stadium, but for the company itself," councilman Vincent M. Ignizio told the New Tork Times' City Room. "The taxpayers are spending billions for this company to maintain its operations and deserve the recognition for their largess." 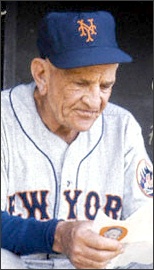 If the name fits: The timing for a taxpayer-inspired name also is a bit prophetic.

The Mets first home game in their new stadium is scheduled against the San Diego Padres on April 13, 2009, just two days before the annual IRS filing deadline.

Not only is Stengel a Mets icon, his famous question could easily be adapted to our current fiscal crisis:

"Can't anybody here run this company?"

Stengel photo courtesy of and available from Mets MLB Shop

In the comments at my blog, my brother suggests a different name for Citi Field. Citi Failed.

They only have to buy one extra letter for their sign.