The presidential election clock is ticking down. You know what that means. We're running out of time to look at Joe the Plumber's tax bill! 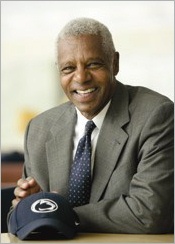 Last week, Samuel C. Thompson, Jr., professor of law at Penn State's Dickinson School of Law and founder and director of the university's Center for the Study and Acquisitions, examined the potential taxes that Joe Wurzelbacher (aka Joe the Plumber) might pay if Sen. Barack Obama is elected and his tax plan as presented.

As part of Penn State's "Election 2008: Issues Forum and Voters' Rights," Thompson presented J and the $4.60 Progressivity Debate. He looked at what tax Joe might pay under Obama if Joe did indeed own a business that made more than $350,000 per year.

Fair or foul increase? The next logical questions are what would be the economic effect of the increase in tax on Joe's income and would it be fair?

Sen. John McCain says the additional $4.60 per $100 earned over $350,000 will destroy jobs in small businesses. Thompson says that argument "is flat wrong for at least three reasons."

Therefore, says Thompson, McCain's claim that increasing the top marginal rate from 35 percent to 39.6 percent  is going to lead to a loss of jobs is a "gross overstatement."

"Different people have different views of fairness," says Thompson. "However, throughout the history of the income tax the rates have been progressive, meaning that the more a person has in taxable income, the more the person pays proportionately in tax."

"Since we have always had a progressive income tax system, most informed Americans would likely think that such a system is fair."

You can read Thompson's two-page PDF summary or view his 30-page PowerPoint presentation for more details. And a big tip of the hat to TaxProf for the notice this look at Joe the Plumber's possible tax bill.

Tax Carnival on the way: For all you Tax Carnival fans awaiting our 42nd edition, don't worry! It will be here later today.

The hubby and I headed north over the weekend for a brief break and I left the laptop at home. I have some errands to run this morning, but will dive head-first into the Tax Carnival submissions when I return.

And before the day is over, the latest Carnival of Taxes will be posted! Thanks for your understanding and patience.

Maybe I'm missing something, but I don't see what numbers are crunched, here. He converted two marginal tax rates from percentage terms to per-$100 terms, and subtracted. I think most people realized that Obama's plan does, indeed, call for top marginal tax rates to be 4.6 percentage points higher.

The issue is not that this money would automatically keep Joe from working, but that, on the margin, it would discourage work, while the tax credits would encourage indolence. There is really no question, here -- if you reduce the rewards for something that people do to earn those rewards, they'll do less of it. The argument you have to make is that these incentives (for the productive to be lazier, for the lazy to be lazier still) are worth the benefits.

In 1962 President Kennedy advocated lowering the top tax rate from above 90% to 70%, which happened shortly after his death. His speech to the economic club of Boston on why high marginal rates destroy jobs and reduce revenue to the government is the seminal lay explanation on this subject

The referenced study is wrong in overlooking this obvious factor in the 1962-1969 period.

"The Kennedy tax cuts helped to trigger a record economic expansion. Between 1961 and 1968, the inflation-adjusted economy expanded by more than 42 percent. On a yearly basis, economic growth averaged more than 5 percent.

Tax revenues grew strongly, rising by 62 percent between 1961 and 1968. Adjusted for inflation, they rose by one-third".