A couple of tax evasion cases involving famous folk have popped up today.

First the case with the U.S. connection. The father of actress Michelle Williams has agreed to return to the United States to face tax evasion charges.

Larry Williams, a prominent stock market trader, had been fighting extradition from Australia since he was arrested by police there in 2006 when he flew to Sydney for a speaking tour in Australia and New Zealand.

The IRS wants to question the 65-year-old Virgin Islands resident, who has been free on bail, about a possible in unpaid taxes from book royalties and earnings related to international seminars he conducted between 1990 and 2001.

Michelle Williams received an Oscar nomination as best supporting actress for her performance in the 2005 film Brokeback Mountain. She played the wife of the character portrayed by the late Heath Ledger, who is the father of her 3-year-old daughter.

The actress' dad obviously thinks he can beat the IRS.  "I will fight his and win," he told the press. "I will be back. I have a lot of friends here in Australia." 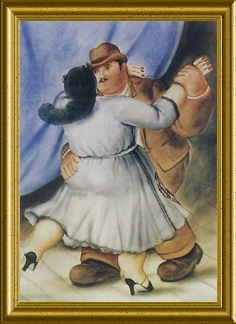 Now to Italy, where Fernando Botero, the Colombian painter and sculptor famous his depictions of plump people, is under investigation by tax authorities who believe he didn't declare almost in earnings over the last five years.

Tax officials in Viareggio contend that Botero must pay Italian taxes because his artworks are produced entirely by companies and foundries in the country, which then distribute them to galleries worldwide. Between 2003 and 2008, allege authorities, Botero should have declared earnings of euros, or in U.S. currency.

The artists also has a studio in Pietrasanta, a Tuscan town where he spends part of the year. It's also the source of a tax inquiry.

As with Williams, it's no surprise that the alleged tax evader believes he is innocent. Botero, who lives in the tax haven country of Monaco, told the Italian press that his Italian tax position will soon be cleared up.

Botero's Danseurs courtesy of and available at artnet.com

I can't imagine what it must feel like being on the run never knowing when the IRS will show up and "drop the hammer" as the have been known to do. If a person has made millions of dollars why don't they set some of it aside, pay their taxes and use the rest to enjoy their life?

I wonder if some of these people know of some of the many professional tax resolution services available for them to use. It is entirely possible to work out a deal with the IRS without the IRS working our their own deal with the delinquent taxpayer. Please, someone help me understand!

Perhaps in prison Botero can produce a series exploring the theme of fat cats, instead.

It's interesting that these are both international cases. There's still that mystique about transferring money overseas, but it's starting to look like the best way to avoid taxes is the old-fashion "not reporting everything" trick. On the other hand, tax evasion might be all about the mystique. I'm guessing that's why Olenicoff (http://www.taxrascal.com/the-swiss-banker-the-real-estate-billionaire-and-the-smuggled-diamonds/92/) insisted on smuggling diamonds rather than shuffling papers.