California tax hikes on the way

Hey Californians! The fun just keeps on coming for you guys.

Fresh off of the Prop 8 same-sex marriage vote and its fallout (much citizen unrest, possible business implications and lawsuits in the works), you now get to deal with a special legislative session that might hike and expand your state sales taxes. 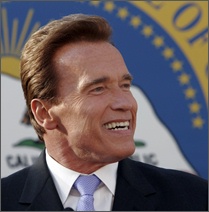 If that happens, it'll likely cost you more to drown your higher tax woes, as Gov. Arnold Schwarzenegger also is calling for an increase in the alcohol excise tax.

"I’m not a believer in taxes; I’m not a believer of increasing fees. It’s just under these circumstances it’s necessary to do," Schwarzenegger said. "We have a dramatic situation here and it takes dramatic solutions ... and immediate action. We must stop the bleeding."

California's budget shortfall has now reached A large part of the Golden State's problem is that in addition to sales and income taxes, it relies heavily on capital gains collections. That tax source has dried up as the stock market nosedived.

So to help fill some of that tax hole, the Governator has proposed increasing the sales tax from to for three years and broadening it to include such things as appliance and furniture repair, vehicle repair, golf, veterinarian services and tickets to amusement parks and sporting events.

Other components of Schwarzenegger's plan include:

The "Hollywood tax credit" is a direct response to tax incentives offered film production from other states and Canada (and blogged about most recently here).

If approved, the increases, which are expected to raise before the end of fiscal 2009, would take effect as soon as possible.

You can watch Arnold's announcement of the special session and his tax proposals (and more) here.

Look! Another California "progressive" policy! I personally cannot wait unitl that damn state slides off into the Ocean....

Problem is, that alot of other state leaders look to Kalifornia as a role model for their way of future policy.

Talk about your over regulated, inflated, systemic-drag on personal and private industry.... thats... Kalifornia!