Forget Wall Street vs. Main Street. The financial battles in this economic downturn are being fought in the trenches of family homes, pitting parents against kids.

The hubby and I don't have any children, so I'm relying on other reports, such as a story in today's New York Times about how families are coping with new fiscal realities.

According to Jan Hoffman's article The Frugal Teenager, Ready or Not, "Panicked, stressed parents are struggling to explain and impose restraints, just when teenagers are expecting more spending money, not less. Many adolescents respond with anger at what they see as a bait-and-switch world, fear for their families and confusion about budgeting."

Spare the $ lesson, spoil the child: You've seen it. Maybe you've contributed to it. "It" is parents giving their kids just about everything the child (of any age) wants.

That's nothing new. Parents have always spoiled their kids. I know mine did. I knew we weren't rich, but I also got almost everything I ever wanted.

But then my wants, for the most part, weren't outrageous. That's because my parents made it clear that while they wanted to make me happy, there were financial limits.

As I've mentioned before, my pragmatic mother had an interesting way to put a stop to excessive Christmas wish lists. She told my brother and me that while Santa might deliver the gifts, he also sent her and Dad a bill afterwards.

So each December, our letters to St. Nick took price tags into account.

Only two request rejections: Beyond the holidays, I can only remember two big things that my parents flat-out said "no" to. 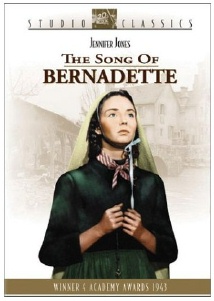 After seeing Song of Bernadette, in which the movie's title character was a sickly child who suffered, in part, from asthma, I literally begged to go to Lourdes.

Bernadette was me. Like her, I had breathing issues. I had spent much of my youth in the hospital being treated for asthma.

All I wanted was the same miraculous cure that she received. I didn't think that was too much to ask.

But mom and dad did. Although they also wanted me to be healthy, they drew the line at a trip to France.

The other big "no" was my request for a pig.

Yep, we had just read Charlotte's Web in Mrs. Clark's second grade class and I had to have my own personal Wilbur.

To my dismay, but the delight of our neighbors, we remained a dog-only family.

Changing attitudes: The kids in Hoffman's story aren't asking for pigs, although a few probably have their hearts set on a European jaunt at some point.

However, those young people are now more likely to find themselves as disappointed (or more so) as I was.

California psychologist Madeline Levine told Hoffman, "The kids are going to be confused. They've never known not having what they want. And the parents are going to have to tolerate their kids' anger."

I know how my mom "tolerated" my anger. Apparently parental tolerance is not the same nowadays. And yes, that is a geez alert you hear going off.

Wendy Postle says in the New York Times article that her teenagers have become angrier and more argumentative about money. "They seem so selfish," she said. She wondered whether the fault was hers, whether that early lavishness was a parental failing.

To Postle's self-assessment, my mother and I say, "Duh!"

Failing financial literacy: Helping stoke the anger is the fact that many of these kids today (oops, another geez alarm sounding!) are ill-equipped to deal with fiscal realities.

"American teenagers, many of whom have weak quantitative skills, are generally naïve about finance," writes Hoffman. "In a 2007 study for Charles Schwab, the financial services company, 62 percent of teenagers believed they were prepared to deal with the financial world after high school. That boast was undercut when they were probed about topics like check-writing and paying bills."

Kids' financial advice: As with adult personal finance, there's lots of advice on how to help kids responsibly handle money. I dispensed some myself in this article, Raising Money-Smart Kids, that I wrote for austinwoman magazine.

As part of that article, I listed some Web sites that focus on young money:

There also are several blogs dealing with kids and cash, including:

My fellow personal finance blogger Money Hacks also hosts regular Kids and Money Blog Carnivals. Click here for the latest edition; click here to see past compilations or submit your own post to a future carnival.

All of these online resources can help you and your children deal with our current tough economic times.

And I want to add my personal best wishes to all you brave parents. Here's to your success in raising financially responsible kids. Not to add more pressure, but our futures truly do depend on it!

Kids, money and economic chaos <---that's what i was looking for

"As I've mentioned before, my pragmatic mother had an interesting way to put a stop to excessive Christmas wish lists. She told my brother and me that while Santa might deliver the gifts, he also sent her and Dad a bill afterwards. "

Awsome. I should have thought of that with my son haha

We have helped our teen learn to budget using these percentages as guidelines.

It is our hope that she skips the credit cards, pays cash for cars and only borrows money for a mortgage.

We believe that the answer to our economic problems is capitalism. We believe that starting businesses creates jobs, increases the flow of money which in turn helps our economy. Business owners are more likely to be homeowners, which creates an upturn in the housing market. By starting earlier the chances you fall behind decrease dramatically due to compound interest. Imagine if you had a business when you were ten or started saving when you were eight. How much would you have at sixteen? How much when you retire at 30?