Your tax homework for tonight's debate

Tonight's first debate between Barack Obama and John McCain is on!

Since both candidates are in Oxford, Miss., getting ready, I thought you might want to prepare, too.

True, tonight's event is supposed to be about foreign policy, but you can be sure that economic issues will come up in the wake of the bailout plan that's still being hashed out in Washington, D.C.

The Tax Policy Group of Deloitte Tax LLP has put together a nifty document detailing the two candidate's plans. As I mentioned in this previous post, the Illinois Democrat and Arizona Republican are making the usual election-year calls for tax relief. And generally, most Americans would benefit from either.

But, as is always the case with taxes, the words "generally" and "most" means some folks will fare better than the others.

Deloitte epxerts also note that the looming expiration of Dubya's tax cuts, mounting federal budget deficits and demographic pressures put on Social Security and Medicare programs will compel the next president to address taxes earlier rather than later in his first term.

The Wall Street Journal put together the table below based on the Deloitte computations. You can get a bigger, better look at the table, along with Tom Herman's story on it, here. Click here to read the source material, Deloitte's "A Familiar Call for Change." 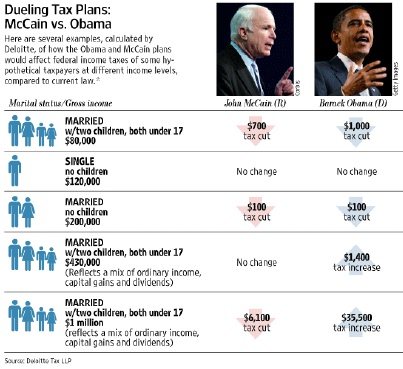 Other debate data: Deloitte also is a font of debate and technological campaign tidbits.

In the first ever televised presidential debate -- John Kennedy vs. Richard Nixon in 1960 -- who folks thought won depended upon how they received the debate. Radio listeners judged Nixon the winner; television viewers gave the debate to Kennedy.

Then the firm takes a look at how the political world has embraced new/social media techniques and what that mean in a larger context in Presidential Campaigns Show Businesses How to Tap Social Networking and New Media Tactics.