The United Kingdom's housing market seems to be running on a track quite similar to the one here in the United States.

For the last several months, housing prices have been falling and credit is tight. Builders and mortgage brokers are watching business dwindle. 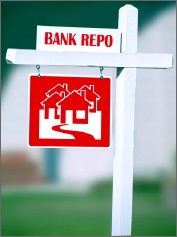 And the wealthy in Great Britain have now found that they, too, can lose their homes. The Times Online reports that several banks have seized an ( U.S.) London mansion:

The six-bedroom house on Ilchester Place in the wealthy enclave of Holland Park has been repossessed and put on the market at The property was owned by Robert Bonnier, 38, who shot to fame in the dot-com boom a decade ago with Scoot.com.

It is believed to be the most costly property ever repossessed in England.

Bonnier, according to the Times, bought the house last year for paying in cash and coming up with the rest via multiple loans, hence the involvement of several banks in the repossession. He had hoped to sell it for

Seems the best laid real estate plans everywhere are not quite panning out.

UK real estate watchers fear that this high-end repossession could be the first of several, if not many. One agent told the paper, "There are five potential repossessions in Mayfair this year, which is unheard of."

More on the Bonnier mansion repossession in The Telegraph and Daily Mail.

Repossession vs. foreclosure: When I read the story of the London home going back to the banks, I thought maybe that repossession was Brit-speak for foreclosure. But it seems that home repossession and foreclosure in the UK are two different legal situations.

Here in the U.S. we don't usually hear the expression "home repossession" in connection with a borrower defaulting on a mortgage. But apparently "repossession" is the technical term for the end result of the foreclosure process here in the States.

Julia Redstone of Foreclosure Listings Blog talks about home repossession in this post. Essentially, during the foreclosure process, if the home goes to auction and there's no buyer, then the lender takes over, or repossesses, the house.

Any real estate and/or foreclosure experts out there, please feel free to add your comments about and elaborations on home repos, in the U.S. or UK.

Fair enough - I doubt they'll be too badly affected by this anyway.

But there are lots of ordinary people affected by repossession every day.

If it happens to you then don't go to an estate agent - they are geared up for one kind of business only. Beware of rent-back schemes... most of those guys are crooks.

Your best bet is something like a lease option, where you can hand the keys back and walk away debt-free.

There are lots of good guys out there who'll evaluate all your options and help you
Check out My House Broker: http://myhousebroker.co.uk/stop-repossession-now/

These guys are London-based and can help people to sell quickly for the best possible price, even with no equity.

I'm glad you found my article "Repossession vs. Foreclosure" useful - it's actually the most linked-to article on my blog!

Someone, I think Oscar Wilde, described the UK and the USA as two countries separated by a common language - the legal codes as they relate to property are like that - just similar enough to lull buyers into a false sense of security, just different enough to cause outrage... we get surprised that US realtors charge more than a 1% fee ... you get surprised that it typically takes 6-8 weeks to write up a sale contract in the UK rather than being something that can be done on the afternoon you shake hands on the deal!