How's this for a Tax Twilight Zone moment?

I just received an e-mail that says both presidential candidates' tax plans will reduce millions of taxpayers' liability to zero or less. The percentage of U.S. residents who wouldn't have to pay taxes under either a Barack Obama or John McCain Administration would be 44 percent or 43 percent, respectively.

The freaky thing about those numbers (and we'll get to the disturbing thing about them in a minute) is that the e-mail containing them arrived shortly after I blogged about how more than 40 percent of Australians pay no taxes, and used that statistic as a hook to point out other parallels in the two tax and political systems half a world apart.

Millions more tax-free: The startlingly similar numbers of potential U.S. non-taxpayers come from the Tax Foundation. The  nonpartisan, Washington, D.C.-based tax research group, has been tracking the tax plans, from both fiscal and policy standpoints, of both Obama and McCain.

If all of the Obama tax provisions were enacted in 2009, the number of nonpayers would rise by about 16 million, to 63 million overall, or 44 percent of all tax returns.

If all of the McCain tax proposals were enacted in 2009, the number of nonpayers would rise by about 15 million, to a total of 62 million overall, or roughly 43 percent of all tax filers. 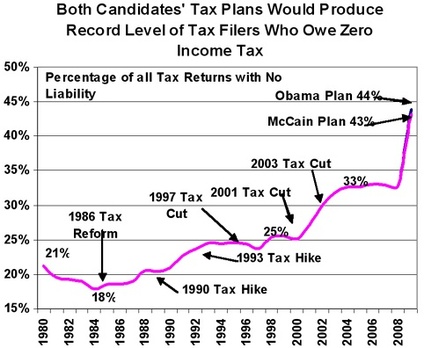 Under current tax laws, IRS statistics for 2006 show that tax filers, essentially one-third of all filers, have no tax liability after taking their credits and deductions. "For good or ill," notes the Tax Foundation, "this is a dramatic increase since 2000 in the number of Americans who pay no personal income taxes."

Who's left holding the tax bag? The problem for both candidates, their political parties and you and I is, Who is left to pay? While it is laudable to want to help ease tax burdens, this is where things get disturbing.

If people already are pointing fingers at each other -- rich, poor, small businesses, big corporations, tax slackers, tax burden bearers -- then it will only get worse as the split between those who pay and those who don't nears 50-50.

Realistically, neither man's tax plan will go into effect as presented on the campaign trail. But their proposals do bring up the issue of how a tax system should work. Right now, it's a big political goody bag instead of a sensible method to fund a country's operations.

Dubya deserves credit for appointing the President's Advisory Panel on Federal Tax Reform that came back with some interesting ideas about how to truly reform our tax system. Too bad no one had the political stomach to even give the Panel's suggestions a second look.

But with both Obama and McCain proposing literally giving away so much, we have an opportunity to seriously reconsider a system in which the spoils of victory are ultimately so costly to everyone.

Scott Hodge, who wrote the paper for the Tax Foundation, cuts right to the chase: "It is time for a serious public discussion of whether it is desirable to have so many Americans disconnected from the cost of government and what the consequences are of using the tax system as a vehicle for social policy."

Are you willing to give up a tax break? Which one? How would you make up the lost revenue from either Obama's or McCain's tax proposals?

what is wrong to returning marginal tax rate used during 1951-1963. That is only way paying down the debt.

government representatives get elected by promising solutions to our social ills by spending billions. there is no responsibility in any government, local, state or federal in any country. government is inherently inefficient, wasteful and lastly somewhat corrupt. we don't need politicians, they are the problem, we need incorruptible efficiency experts to manage our money and budgets responsibly and without ideology, special interest or political persuasion.

When ever income cannot stay ahead of expenses then expenses have to be reduced. This is an elementary fact wheather is involves a home budget, a business, or a government. Why is this not obvious to our intelligent leaders? I think it is because they must have some alterior motives than the good of our country.
Just for an illustration, lets divide this country into 2 groups, business people and consumers. If a lot of money is given to the business group, where is the motivation and stimulus to provide goods and services? On the other hand, if a lot of money (not too much or too little) is given to the consumers there is a great motivation and stimulous for business to provide goods and services. Even if consumers put it in the bank the bank can do with it what banks do best. This would be the proper way for banks to receive money anyway.
If you divide $8,000,000,000,000 (trillion)by our population (305,000,000) every man, woman, and child would get about $26,000 each. It wouldn't take near this amount of money to turn this economy around in a hurry. The multiplier effect would be amazing too.

well let me tell you what I would do to make up the lost revenue from Obamas tax plan I would Leaglize Marijuana and Tax the shit out of it! most people have no idea how many secret smokers there are in this country, I believe about 17 states have now decrimnalized or put into place somekind of medical marijuana law too bad were not already taxing it huh...millions of dollars in lost revenue right there and thats just the tip of the iceburg...We could save billions on just not imprisioning theese harmless individuals any longer...when you look at the savings and add that to the new income streams that marijuana legalization could create it seems to me that the answer is pretty obvious!!!!!

As usual, this seems to ignore the payroll tax. What happens to these numbers when the payroll tax is included? By far the largest tax paid by the multitude of low income workers is the payroll tax; the workers' portion and the companies' portion adds up to around 15%, and there are no deductions for that.

What am I doing wrong?

Neither Republicrat will be able to keep to his proposed plan. But the winner will do everything he can to try to convince us that he did keep the promise. It's not cynicism; it's just the way Big Party politics goes!

I don't know which annoys me more, that they would both dig us deeper into debt, reasons notwithstanding, or that they make promises they know they won't/won't have to keep! Cybcial much? Today I am!

I'm really interested to see how this is all going to work when we're at a record deficit in nominal dollars. (not inflation adjusted dollars) We either have to dramatically increase business taxes, which would backfire by driving some businesses abroad and decrease the tax base or reduce spending dramatically.

Depending on who we see elected, those cuts could happen in very different places. One party might go towards cutting military, while the other might cut social programs. Realistically, neither are going to be willing to make enough cuts in just one area to bring our budget back into balance. This will be an interesting next few years and could very well be a defining time in the future economic strength of our country.