Who's paying for the conventions?
You and I!

The Democratic and Republican party conventions won't get near the ratings of the Olympics, but all of us really should watch them. After all, we're footing the bill.

The Federal Election Commission has announced that each convention will receive in taxpayer funds as part of the Presidential Election Campaign Fund.

This is the money that you and I authorize when we check that box, or boxes, on our 1040 (or 1040A or 1040EZ). You know, that line right under the address label spot on the form that says, "Presidential Election Campaign. Check here if you, or your spouse if filing jointly, want $3 to go to this fund."

Oh, you didn't check it. Me neither. In fact, most of us don't check the box.

The check-box program was created in 1974 as an effort to ultimately replace private political donations with federal funds, a dollar (when it originated) at a time. Inflation has bumped it up to the current $3. 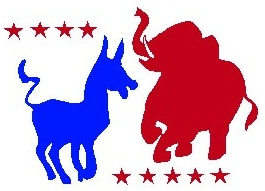 Ah, those idealistic days of yore.

But things haven't quite worked out as planners had hoped.

Maybe it's because people, in a rush to finish their returns, simply overlook the line.

Or they don't believe the IRS promise that checking the box won't affect your tax bill at all.

Or perhaps after taking a look at how much they've shelled out in taxes during the past year, they're simply not in the mood to give any more money to any federal program.

Whatever the reason, it's not generating much enthusiasm, from either the public or many candidates. Presumptive Democratic presidential candidate Barack Obama is the latest to eschew the federal funds.

Former Federal Election Commissioner Scott Thomas, in an interview with CNN Politics, acknowledges that the check-box plan didn't eliminate or even reduce private campaign donations. And Congress, he noted, has not made it clear that in addition to funding presidential campaigns, taxpayers are also paying for the party's conventions.

Steve Ellis, vice president of Taxpayers for Common Sense, goes further, saying taxpayers who check the box are being "hoodwinked."

You can read more about the Presidential Election Campaign Fund at this FEC campaign checkoff Web page. Don't worry about that "Published in December 1993" notation. Things haven't changed.

That sounds like a broken system for nearly everyone involved : (