What do you think the Taxpayer Advocate Service (TAS) should focus on during the upcoming 2009 fiscal year? 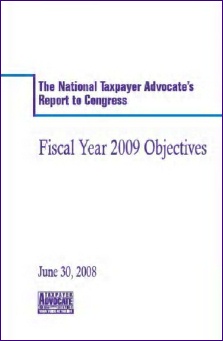 That issue is one of several in the Advocate's Fiscal Year 2009 Objectives, an annual report required by law. It sets out the issues of concern to the Taxpayer Advocate office, as well as provides analysis and statistical information.

To combat the problem, Olson's report offers eight recommendations, including the creation of a centralized unit to handle ID theft cases and the development of a centralized set of procedures that cuts across IRS functions.

Although the IRS has taken some steps, such as development of an agency-wide identity theft indicator, Olson says her office will work with the IRS to improve procedures in this area.

Canceled mortgage debt issues: Number two in Olson's estimation is cancellation of debt income. In most circumstances, when a debt is canceled, the borrower generally must include the amount of forgiven as gross income.

However, some mortgage debt that is canceled now is exempt from taxation thanks to  the Mortgage Forgiveness Debt Relief Act of 2007. But to get his tax break, taxpayers must file , Reduction of Tax Attributes Due to Discharge of Indebtedness (and Section 1082 Basis Adjustment), with their tax returns.

That filing requirement has been overlooked by many taxpayers, notes the report, so TAS plans to focus on increasing public awareness of the rules and exceptions.

IRS Collection practices: A persistent issue -- how the IRS approaches its money collecting duties -- is third in the FY09 annual TAS report.

Olson says her office remains concerned about additional collection issues, such as:

Other TAS priorities: Other areas of emphasis for FY09, according to the report, include monitoring the private debt collection program and working with the IRS to assist taxpayers with "disproportionate tax liabilities" caused by the exercise of incentive stock options and their treatment under the alternative minimum tax.

You can read the Fiscal Year 2009 Objectives report here; the report's supplement here; and learn more about the Taxpayer Advocate Service here.