The price of nicotine addition just got more expensive in Vermont.

Starting today, the Green Mountain State's tax collector will pocket $1.99 on each pack of cigarettes sold within state borders. That's a hike of 20 cents; the state last bumped up cigarette taxes by 60 cents per pack back in 2006.

The added revenue will go to pay for Catamount Health, Vermont's health insurance plan for its uninsured residents.

But the smoking break will likely end today. 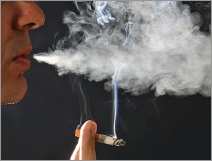 Last spring, Massachusetts legislators OK'ed the higher cigarette tax this July 1, which is the start of the state's 2009 fiscal year. But disagreements between the House and Senate on corporate taxes held up the anti-smoking tax.

So with the July 1 deadline looming, the Massachusetts legislature crafted and passed a separate cigarette tax only measure. It was sent to Gov. Deval Patrick last night, who said he "was inclined to  support" the bill, but that he wanted to read it first. If it does pass Patrick's muster, he is expected to sign it into law today, making the higher cigarette tax effective tomorrow, July 2.

Granite State smoking tax could go up, too: Elsewhere in New England, another smoking tax hike will depend on how much the current levy raises this summer.

New Hampshire's cigarette tax is $1.08 per pack. If that level doesn't generate at least $48 million between July and October, the tax rate will go up by a quarter in the fall.

The shortfall could happen,since smoking has declined, in large part because of already existing cigarette tax levels.

"Certainly, raising taxes on cigarettes is good public policy if you are trying to curb smoking," Dennis Delay, deputy director of the New Hampshire Center for Public Policy Studies, told the Boston Globe.

"But I think the state is stuck between wanting to discourage smoking in public places and still relying on cigarettes as a revenue source, and I think that source will become perhaps not as stable as it has been going forward," Delay added.

Cigarette runs: However, some New England states, even with higher taxes, could get a boost in cigarette sales thanks to the anti-smoking tax just enacted by one of their neighbors.

Last month, New York's cigarette tax became the most expensive in the United States (blogged about here). At $2.75 per pack, New York now edges out New Jersey, the previously most expensive state in which to smoke.

So some Empire State smokers might be tempted to make cigarette runs to nearby states with "bargain" tax rates.

Of course, another state excise tax -- the one on gasoline (blogged here) -- would make such cross-border travel cost effective only for those who live along the Vermont-New York state line … or for those who have a hybrid with a lot of trunk space!