4th of July fireworks … and taxes

Dealing with taxes often causes explosive financial -- and emotional -- reactions. In a few situations, however, the connection between taxes and pyrotechnics is literal.

Although the independence we Americans celebrate each 4th of July was driven in large part by our battle against unfair taxation, several governmental jurisdictions tag an added tax onto the fireworks we set off on this national holiday.

Texas, Indiana and West Virginia levy a special tax on fireworks. So does a county in Alabama. In each case, the added tax goes specifically for causes that can be tied back, at least tangentially, to fireworks.

Lighting up the Lone Star skies: Here in Texas, when we buy our Black Cats or sparklers this Independence Day, part of our payment includes a 2 percent fireworks tax. 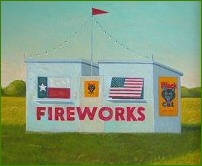 Lone Star State fireworks retailers have been collecting the fireworks tax, along with regular state and local sales taxes, since Oct. 1, 2001. The added charge is specifically for "small fireworks in the U.S. Department of Transportation's 1.4G category that may legally be sold to the general public each year in Texas from June 24 to July 4 and from December 20 to January 1."

To shoppers looking to light up the night, that legal, legislative gobbledygook means the tax applies to such popular products as firecrackers, rockets, Roman candles and fountains.

There's never been much complaining about the fireworks tax, probably because the money raised is earmarked for firefighting efforts. That's a government service that's always appreciated, but even more so each hot Texas summer.

By the time each July 4 rolls around most of the state is in a severe drought, exacerbated by weeks of high-90s or 100-plus temperatures. The crispiness of Texas vegetation means that the state is a tinderbox, with disaster just one small spark away.

Alabama fireworks add-on: Down in Alabama, Cleburne County assesses a similarly directed tax. The county collects an 8 percent tax on fireworks, with "the net proceeds of the first two cents ($.02) per one dollar ($1) gross sales of any such tax levied and collected shall be distributed equally among the volunteer fire departments located in the county. The remaining net proceeds shall be paid to the county general fund."

West Virginia sparkler levy: Retailers in the Mountain State collect a "Sparkler and Novelty Registration Fee" on certain fireworks, detailed in this official announcement issued by the West Virginia State Tax Department when the tax was enacted in 1995

The West Virginia sparkler and novelties business fee also is interesting because the igniting of most fireworks is illegal in the state. All that can be legally set off now are the non-explosive variety.

Some lawmakers think it's time to change that and collect some tax money in the process.

According to the The Register-Herald (Beckley, WV), the proposed new law would "legalize bottle rockets, mortars and all that — the whole shooting match."

In addition, a companion bill would authorize a 10 percent tax on fireworks, with the money dedicated to a proposed retirement fund for West Virginia’s volunteer firefighters.

Lawmakers who support the fireworks law changes say they are just being pragmatic. Many West Virginians, they argue, already are buying the banned celebratory products from neighboring states. By legalizing all fireworks and imposing a double-digit tax, bill advocates say the state could collect up to $2 million a year.

Indiana fireworks tax expanded: Once upon a time in Indiana, July 4th celebrants had to buy a $2 license from the Indiana Fireworks Users Association to purchase fireworks. They also had to sign a statement promising to take the pyrotechnic items out of state or to a special discharge site for detonation.

In 2006, however, a law change took effect that now allows Indianans to set off fireworks on their private property or on property where they have the owner's permission. 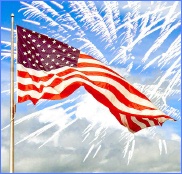 And to help pay for that new in-state ignition privilege, Hoosier State buyers now pay a 5 percent tax on the fireworks they buy.

The 5 percent "safety tax" is added for all fireworks along with the sales tax, for a total of in taxes and fees. All Class C fireworks (common fireworks) became legal every day in Indiana, except for city ordinances. M-80s and cherry bombs are not classified under Class C, and thus are still illegal. Another change under the most-recent law states that buyers must be at least 18 years old to purchase most fireworks.

And where does the fireworks tax go? Into a fund benefiting the Indiana Department of Homeland Security, specifically focusing on disaster relief and firefighter training.

So as you enjoy tonight's July 4th fireworks displays, appreciate the taxation-without-representation connection that led to U.S. independence, as well as how some of our elected lawmakers today use our celebrations to increase tax collections.

Hat tip to the Tax Foundation for Alabama info.

Isn't that additional tax considered taxation without representation??? Isn't that illegal? Or better yet called THEFT? I didn't realize that until AFTER I paid for the stupid fireworks in the first place! What a rip off!