Tax troubles for Keith Olbermann …
and others

State taxes certainly are a pain for some prominent people. The latest celebrity to run afoul of state collectors is MSNBC's Keith Olbermann. 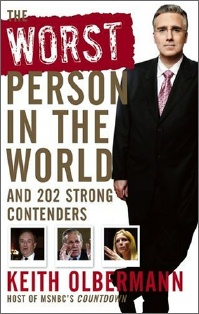 As the host of the cable TV program Countdown, he regularly cites the screw-ups of others in his "Worst Person in the World" feature. Now Olbermann is catching heat for apparently being one of the worst New York state taxpayers.

OlbermannWatch.com, which proclaims that it has been "persecuting Keith since 2004," broke the story that a New York state tax warrant is still outstanding for Olbermann in connection with $2,269.50 in unpaid Empire State taxes. The money was due not from Olbermann personally, but from his Olbermann Broadcasting Empire Inc.

Soon after that revelation, the anti-Olbermann Web site reported that it had confirmed that "the New York State Department of Labor filed an Industrial Commission Warrant against Olbermann Broadcasting Empire on April 1, 2008 for $1,039.15 with the New York County Clerk's office."

According to The New York Post's gossip column Page Six, an MSBC spokesman called the situaiton "a bookkeeping disagreement between Keith's accountants and the state which was resolved months ago."

Other celebrity tax travails: Accounting issues also were the reason given by Senatorial candidate Al Franken for his run-ins with several state tax collectors.

Then there is musical royalty, the Queen of the Blues (Koko Taylor) and the Queen of Soul (Aretha Franklin), who have had property tax payment problems.

Federal tax follow-up, too: On the federal level, the naked fat guy from the first season of CBS' Survivor show has now taken his tax conviction to the Supreme Court.

Richard Hatch was convicted in 2006 of evading taxes on his $1 million prize, as well as on his income from co-hosting a radio show and rental properties he owned in Rhode Island.

In his appeal to the nation's highest court, Hatch's attorney argues  that the district court violated Hatch's rights by curtailing his explanation of why he believed the TV show producers had paid the taxes on his winnings.

Tax troubles to the tune of $1,000 or $2,000 is not a bad tax problem to have; I would not even consider it a problem at that level. Wesley Snipes? That is a tax problem!