Back in February, I blogged about the state tax implications of the economic stimulus payment.

The question then was, "Will I owe state taxes on my federal rebate?" And the answer was, "Maybe."

Since that original state rebate post, which noted that Alabama residents will likely owe tax, but New Yorkers won't, a handful of other states made their rebate tax stances known:

Now, AccountingWeb.com has followed up on the rebate state tax question and comes up with the same answer. According to its report:

Few (states) will tax the money directly as income -- currently, only Alabama is considering this option -- but most anticipate additional revenue from sales or excise taxes, or indirectly, in some states, from a decrease in a deduction. States that allow taxpayers to deduct federal taxes paid from their income may require a reduction in the deduction for the amount of the rebate.

Among those states that could cash in on reduced deductions is North Dakota. The Tax Commissioner there says that N.D. taxpayers who file Form ND-2 (Optional method) should pay attention; the amount of the federal income tax they otherwise could deduct on that state return must be reduced by their rebate amount.

Montana's Department of Revenue advises taxpayers that "if you itemize your deductions for state income tax purposes for tax year 2008, your 'federal income taxes paid' deduction may be reduced because of this rebate."

Added revenue via added spending: Elsewhere, reports AccountingWeb.com, state budget directors are trying to estimate the money their treasuries could collect when the federal stimulus payments are spent. 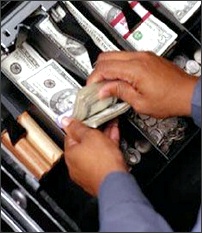 In Michigan, the rebate checks are expected to increase casino taxes, lottery revenue, and sales tax revenue. But the state's budget is actually expected to book a net loss of over two budget years due to provisions in the new Michigan business tax.

Mike Allen, chief forecaster for the Maine Revenue Service, says that while early forecasts indicated the federal stimulus checks could account for in increased sales tax revenues over the summer, that estimate could change because of rising prices in other areas.

And if folks don't have less money for discretionary purchases, that's less sales tax revenue for the state.

Here is a great example of what we did here in Michigan with the new biz tax: