Proposition 13, the landmark legislation that reduced California's property taxes and limited the amount they could be increased each year, turned 30 today.

So with states and localities scrambling for revenue and cutting services, how do Californians like the watershed tax reduction measure now? Apparently a lot.

A just-released public opinion poll reveals that Proposition 13, originally passed by a 2-to-1 landslide, is just about as popular with voters today as it was in 1978. 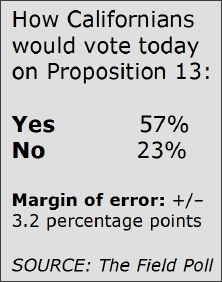 The Field Poll found that if the measure were on the ballot today, of the voters would approve it, even though the Golden State is facing a budget shortfall.

Only 23 percent of survey respondents said they would vote "no." The remaining 20 percent said they weren't sure.

"If there's a surprise in the whole survey, it's that there really hasn't been any change," Field Poll director Mark DiCamillo said.

For you young tax geeks, Proposition reduced California home assessments to 1975-76 levels. It also limited property taxes to of a property's assessed value and placed a annual limit on future increases.

The original tax revolt legislation soon spread eastward, with nearly half of the states enacting similar measures. And Prop 13 was the catalyst for President Ronald Reagan's tax cuts in 1981.

What are they (we) thinking? Dicamillo's expression of surprise at the poll results was remarkably restrained.

Are people really that unable to connect the dots? The only way to pay for services -- law enforcement, education, infrastructure -- is by collecting taxes.

Or do we live not only in tax-capped states, but also a perpetual state of denial?

Despite the bad example set by Washington, D.C., haven't we finally realized that no person or entity can survive in continual debt mode?

Are we not paying attention to painful fallout from the subprime lending crisis, which has revealed how destructive it is to live in a fiscal dream world?

Apparently not, judging by the responses of Californians in this latest Proposition 13 poll.

Certainly we must demand our lawmakers spend our money wisely, but we shouldn't just cut them -- and ourselves -- off financially. Ultimately, that's a destructive fiscal strategy.

Frank D. Russo, publisher of the California Progress Report, parses the poll here. Sometimes, he notes, how a question is asked makes a big difference in the response.

I hope so. Some kind of explanation for this continued refusal to pay for government services would be welcome.

But I fear we've been Pavlovianly conditioned to automatically connect "tax" with "cut."

You can examine the full poll results here. And read more analysis of the poll in the San Diego Union-Tribune, San Jose Mercury News (AP report), San Francisco Chronicle and the Sacramento Bee. 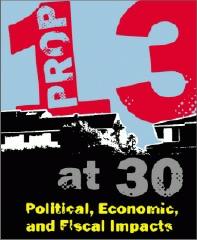 Academic exploration: On this 30th anniversary of Proposition 13, academics, policy experts and journalists have gathered University of California Berkeley for a one-day conference on the tax law.

"Proposition 13 at 30: The Political, Economic and Fiscal Impacts" examines the legacy of the state constitutional amendment, not only in California but nationwide.

Prop 13 saved us all, all of us on fixed incomes. Or on lower level incomes. Property tax is regressive. If state/local government cannot be fiscally responsible, tax income. Period. Those who "get",and have access to sophisticated tax schemes/tax advice, which seldom is synonymous with those who "earn" should pay. Period.

Kay, you struck a nerve.

The California I grew up in had great schools. California's educational system was, before Prop. 13, a shining star nationally, and I am one of its benificiaries.

In the little Moreland School District of San Jose, Calif., we were drilled in the three Rs, but there were also mind-opening classes available in art and science and theater and music.

I didn't know it at the time, but my mind was being expanded. I was more concerned with an embarrassment: I played E-flat tuba in first-period band, which meant second-period big red circle around my lips.

That ended with Prop 13. I has starved a once-great educational system into a frail ghost.

I moved out of state, but my sisters stayed in the state and have raised their children in San Jose, in the same area where I grew up. What they describe about schools today, versus the school sysem I went through, saddens me.

No matter what the supply siders say, you get what you pay for. At some point, if you don't have a sufficient tax base, your children suffer.

The legacy of Proposition 13 is a dumber society. Arthur Laffer, I wish I had a time machine that would bring you from 1978 to today. I'd show you the awful schools of my home town, grab you by the lapels and say "Look what you've done!"

You gotta be kidding me! Are you actually saying you'd prefer to throw out little old ladies on fixed incomes from their lifelong homes to fund cushy civil service union retirements? That's phrased demagogue-ishly, but that's the gist of the argument. (Granted, the spending's not all on retirements, but look at recent trends and compare to private sector.)

When property values go up, taxes used to go up. That forced people on low and fixed incomes out. That's not right, and Californians voted accordingly.

>but we shouldn't just cut them -- and
>ourselves -- off financially. Ultimately,
>that's a destructive fiscal strategy.

You should check, because California has, up until this year, received year after year of record tax revenue. Why is it not enough? Spending grew faster than revenue, that's why. Ultimately, *that's* a destructive fiscal strategy.

As politicians demonstrate, it's easy to spend other peoples' money, especially when it's self-beneficial. When they can't get it together to use the money to do things like pay off past debts when the extra income is coming in, it's time to rethink things.

Are you sure that people need to work for even more days/months per year to pay more taxes? (See the Tax Foundation's Tax Freedom Day stuff to find out how long it takes). IMHO, that just funds the silliness.

Regarding setting prices at the 1975-1976 price levels, the assessment resets whenever the property is sold. So, it eventually catches up. Prop 13 just made it so that your tax payments don't price you out just because your neighbor paid too much.

So are you advocating for a Texas state income tax, too? ;-)