The summer vacation driving season is here. Do you know what your state's fuel tax rate is?

API also tracks rate increases that are due to sales tax increases or increases in the price of fuel. States in which these type of changes have (or will occur July 1) include Alabama, California, Connecticut, Georgia, Hawaii (diesel only), Illinois, Indiana, Michigan, Nevada, New York and West Virginia.

Based on the July 1 effective date data, the average amount of tax imposed on a gallon of gasoline sold in the United States will be 49.4 cents per gallon, up 2.4 cents from the January report. That includes the 18.4 cents per gallon federal fuel excise tax.

For diesel fuel, API found that the national average amount of tax was 56.4 cents per gallon, up 2.8 cents from six months ago. 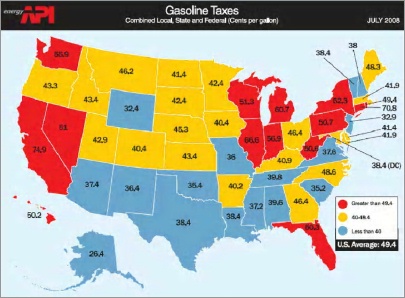 More details on the latest state fuel tax rates can be found in API's chart (PDF version), which reflects a weighted average for each state. This means that any taxes which can vary across a state's jurisdiction are averaged according to the population of the local areas subject to each particular tax rate.

Where appropriate, the weighted average also takes into consideration the typical percentages of premium, mid-grade, and regular fuel purchased in each state.

In states where taxes vary depending upon the price of the motor fuel (for example, where the tax rate is set as a percentage of the sales price rather than a cents per gallon method), the state average listed on API's chart is a snapshot based upon the price of fuel as reported by AAA. The fuel prices used by API for this latest chart were recorded on June 19, so it's likely that the actual amounts right now are a bit higher.

Fascinating, but perhaps they should also mark the states with no income tax, like FL, WA, and NV.

Then you can see how it's totally crazy that high tax states like MA, CA, and NY have really high gas taxes too. (MA is only yellow, but even so... I guess they are still paying for the Big Dig with gas taxes?)