Celebs are target of IRS snoop

John Snyder, a 17-year IRS employee, has been accused of peeking at the tax records of 197 celebrities and sports figures.

If convicted of the misdemeanor charge, the 56-year-old Snyder could go to jail for up to a year, be assessed a $250,000 fine and face a year of supervised release once he gets out of the slammer. 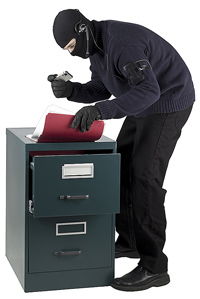 Snyder's job (former job?) at the IRS office in Covington, Ky., mainly involved business accounts. The federal complaint says that he allegedly accessed the individual accounts out of curiosity.

And apparently Snyder also wanted to gather some more relatable tax information. In addition to the snooping in stars' tax accounts, Snyder also is charged with browsing the files of five non-celebrities, including his next-door neighbor.

Wouldn't you like to be a fly on the wall at their next block party!

Corina Yepez, Melissa Moisa, Brenda Jurado, Irene Fierro and David Baker were charged with computer fraud and unauthorized access to tax return information. From  2005 through 2007, each allegedly peeked at one to four tax returns.

Wired magazine's Threat Level blog reports that only were compromised. But one authorized peek is one too many.

"The IRS has a method for looking for unauthorized access, and it keeps audit trails, and occasionally it will pump out information about who's done what," said assistant U.S. attorney Mark McKoen, who is prosecuting the California cases. "In general terms, IRS employees are only authorized to access the accounts of taxpayers who write in. They're not allowed to access friends, relatives, neighbors, celebrities."

These snooping instances underscore recent Congressional testimony. Last month, a Treasury Department investigator told lawmakers that IRS employee prying was on the rise, with 430 known cases in 1998, and 521 last year.

While I agree one time is one time too many, I do want to stick up for most of the IRS employees. I know -- how shocking! However, I met one of the guys out of Austin who does many of the very wealthy (including celebs) tax returns. Our 2007 Austin Wranglers season tickets were next to each other. As much as I tried to pump him for info, he steadfastly refused. The only story I got was about how Willie Nelson showed up to the south Austin IRS office one day and the secretary didn't recognize him.