Aficionados of crime tales, and judging from the popularity of investigative themed shows on TV nowadays, there are a lot of us, might already know that on this day in 1934 the felonious rampage of Bonnie and Clyde came to the ultimate conclusion. 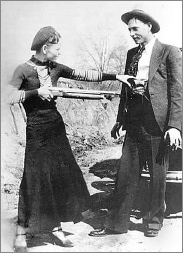 The celebrated Depression-era Texas outlaws were killed in a roadside ambush, famously recreated in the Faye Dunaway-Warren Beatty film, outside of Gibsland, La.

According to the Texas State Historical Association (as previously acknowledged, we Texans own up to -- OK, revel in -- our excesses, both bad and good), the duo's bodies were put on public display in Dallas before being buried in their respective family plots.

If Bonnie Parker and Clyde Barrow hadn't come to such a violent end and instead were captured and brought to trial, they could have faced not only murder and bank robbery charges, but also criminal indictments for not paying taxes on their ill-gotten gains.

Yep, as the G-men proved with Al Capone, who escaped prosecution for his more heinous crimes, tax statutes offer another and often handy way for law enforcement to nab the

Paying up on illegal income: The IRS specifically states in Publication 525, Taxable and Nontaxable Income, that "Illegal income, such as money from dealing illegal drugs, must be included in your income on Form 1040, line 21, or on Schedule C or Schedule C-EZ (Form 1040) if from your self-employment activity."

That requirement has been upheld by the courts, including the 1961 Supreme Court ruling in James v. United States that an embezzler was required to include his ill-gotten gains in his "gross income" for federal income tax purposes.

The Court basically said that if the plaintiff had acquired the funds under the same circumstances legally, there would have been no question as to whether he should have gross income. Therefore, the embezzler had gross income under the tax code, even though the application of another body of law would later force him to return the money.

Writing off deductions on illegal activities: And to prove that the tax laws are, at least in theory, even-handed, the IRS will let embezzlers, thieves, and other criminals take deductions for costs relating to criminal activity.

For example, in Commissioner v. Tellier, a taxpayer was found guilty of engaging in business activities that violated the Securities Act of 1933. The taxpayer subsequently deducted legal fees he spent while defending himself.

The Supreme Court upheld that right because it found the deductions met the tax code requirements which allow the taxpayer to deduct all the "ordinary and necessary expenses paid or incurred during the taxable year in carrying on a trade or business."

In this case, it was ordinary and necessary for a person engaged in an illegal business to expect to have legal fees associated with that business, even though such things may only happen once in a lifetime.

Don't get carried away, though. Federal lawmakers can enact specific provisions that prohibit deductions in connection with illegal activity or other violations of law. And there's no allowable deduction for fines or similar penalties paid to any government for the violation of any law.

If you can't beat 'em, tax 'em: Using the Capone principle, many states have in recent years decided to attack crime problems via tax laws. The most well-known circumstances are taxation of illegal drugs.

According to NORML, the advocacy group for the legalization of marijuana, 20 states require anyone who possesses cannabis or other illegal drugs to purchase and affix state-issued stamps onto the contraband. That's Nebraska's drug tax seal there to the right and you can view other stamps here.

The New York Times, when earlier this year the idea of a crack cocaine tax was floated, reported in its City Room blog that there are 29 states that impose tax liability for controlled substances:

Some of those laws, however, have been successfully challenged in courts. Last September, a Tennessee appeals court ruled the Volunteer State's drug law unconstitutional, saying that an illegal substance could not be taxed.

And Massachusetts' highest court ruled in 1998 that a drug tax was an unconstitutional form of "double jeopardy." The Bay State's statute is still on the books, but per the court ruling is not enforced.

Iowa's drug-related tax is still in effect though. I know because Joe Kristan, who writes the Tax Update blog for Roth & Company, has a great story about the state's drug tax stamp in action.