Get ready to par-tay! Today is Tax Freedom Day.

April 23 is, according to The Tax Foundation, the day in 2008 on which Americans have earned enough money to pay all their federal, state and local taxes for the year. So after today, we can finally start keeping all our paychecks.

Unfortunately, Tax Freedom Day is for illustrative purposes only. It doesn't mean that we actually can quit handing over a portion of our pay to Uncle Sam and his state cousins. But the annual announcement of Tax Freedom Day is a catchy way to show our general tax burdens.

To mark the occasion this year, The Tax Foundation has produced the video below (click here for the YouTube page version) of a flustered taxpayer's countrified rendition of what Tax Freedom Day means to him.

While the Tax Foundation folks obviously had some fun with the video, they say they are serious about Tax Freedom Day, which this year arrives three days earlier nationwide than in 2007. Key reasons why include the upcoming stimulus rebates and a projection of slow growth in 2008.

The graph below tracks Tax Freedom Days from 1982 through 2008. You can click on the image (or here) to see a larger version. 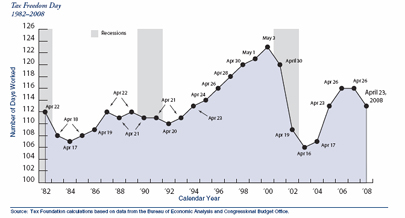 In releasing its 2008 Tax Freedom Day report, the Tax Foundation notes that taxpayers had to work nearly four months of the year before they earned enough money to pay this year's tax obligations at the federal, state and local levels.

State freedom days, too: The Tax Foundation also breaks out the various state Tax Freedom Days. You can click on the map below (or here) for a slightly larger image showing when you were, or will be, free of your state tax obligations. 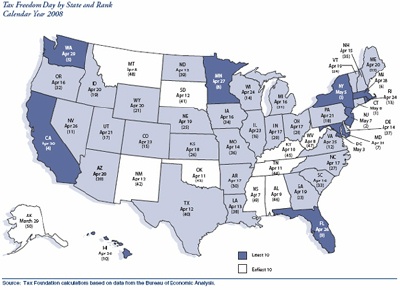 A text table is available in the full Tax Freedom Day report. It shows that Alaskans were the earliest tax celebrants this year, with that state's Tax Freedom Day arriving on March 29. Here in Texas, we were free on April 12, although the hubby and I, because of telecommuter tax issues, also have to take into account Georgia taxes, which were paid off on April 19.

Tax woe unto you is you live in Connecticut. You'll have to work until May 8, the latest state-level Tax Freedom Day this year, to pay off those taxes.

And if you're interested in more on some other Tax Freedom Days, you can read my 2007 report here, and my 2006 take on the tax freedom celebration here.

Might be fund to figure out one's personal income tax freedom day. There are plenty of folks out there who domicile in income tax-free states and who have enough deductions and credits to not pay any US income tax either. Tax Freedom Day on 01 JANUARY!