You might have made up your mind about which presidential candidate you'll vote for this fall, but have you decided yet what to do about your investments in light of the coming election?

Every time we pick a president, lots of attention is paid to what the financial markets might do depending on which party moves into the White House.

Well, quit worrying. Historical data shows us that the bond between election results and the stock market's performance is, at best, a minor connection.

I got to thinking about this issue after receiving an investment newsletter (along with a statement showing that particular holding had taken a hit, dang it!) that featured a story entitled "The Election Connection." The article says:

Over the long haul, it may not matter which political party is governing the county. Long-term growth in the financial markets will always be determined by the ability of individual companies to increase earnings and the strength of our industries on the global stage. Economic policy is a responsive tool. That is, the President, Congress and the Federal Reserve (the Fed) all react to larger trends and events with the collective goal of avoiding recession and keeping the economy from getting too far off track.

Of course, this publication from CitiStreet was written well in advance of its mailing and is naturally very general in nature. Most importantly, one of its key goals is to keep recipients like me, who got bad news on a particular asset, from dumping our holdings that CitiStreet manages.

But, just as food for thought, the article threw in some interesting tidbits. Based on records from 1926 through 2000:

When Democrats were in office, stock returns were higher.

When Republicans were in office, bond returns were higher.

The article also cited an older study (released in 2004), but one also based on data accumulated through 2001, by the CFA Institute and the Northern Illinois University College of Business. The key finding of that report:

Contrary to previous research conclusions and "conventional wisdom," … the political party of the president does not, in fact, seem to significantly influence stock-market performance. Rather, Federal Reserve monetary policy -- whether expansive or restrictive -- is the dominant factor. Stocks and corporate bonds alike perform dramatically better in periods of expansive monetary policy (when interest rates are falling) than in periods of restrictive monetary policy (when interest rates are rising), suggesting that investors should focus their attention on Fed actions, rather than political outcomes.

You can read the complete CFA/NIU study, entitled "Don’t Worry About the Election, Just Watch the Fed," here.

Other studies, similar findings: I then went searching for more recent takes on politics and our money and found a couple of other analyses.

Barden Winstead, columnist for the Rocky Mountain Telegram, wrote back in February that the stock market shows no pattern in post-election years. "The post-election year from December to December has seen the market advance 17 times and decline 16 times," noted Winstead. "The market has not played favorites with political parties." 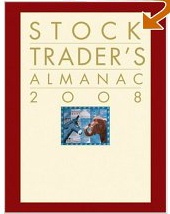 Winstead cited Yale Hirsch's Stock Trader's Almanac, which uses data covering elections from 1864 to 2000. Again, the analysis cutoff date is similar to the CFA report; I guess number crunchers haven't finished sifting through info since the beginning of the decade.

And here's another piece, this one from Fidelity entitled, 2008 Elections: How Will the Stock Market Vote? , and written by chartered financial analyst Dirk Hofschire.

Presidential election calendar years -- such as 2008 -- have historically experienced solid stock returns. Since 1948, the United States has conducted 15 presidential elections, and the stock market gained an average 13.1% during those years containing elections (see Exhibit 1, below). Conversely, the first calendar year after the election (such as 2009) has historically been the worst year of the four-year presidential administrations, averaging only 7.4%. 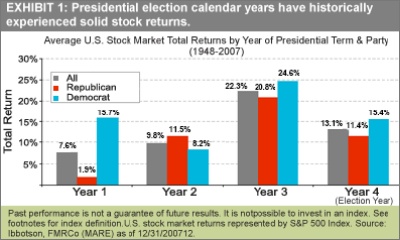 In for the long haul: In all of these articles, the consensus is to hang in there. I know it's tough. I hate seeing my holdings dip any time. But I also know that the assets the hubby and I have are designed for long-term results and in that regard they are for the most part doing OK.

In fact, the dividends and capital gain distributions they produced, particularly at the end of 2007, did a little too well when it came to accounting for their tax costs. But as one financial adviser once told me, I dream of the day my portfolio does so well that I have to pay $1 million in taxes on it.

And we never should totally ignore what all politicians, at every governmental level, have to say about fiscal and tax policy. The ballot results might not immediately affect our financial well-being, but as the CitiStreet piece noted, all politicians react to larger economic trends and events. And those reactions do eventually have some impact.

So in making your final choice, pay attention to what all the candidates have to say about tax revenue and their plans for how the government will spend it. I've previously posted on ways to check out candidates' tax and fiscal stances (here and here). Make sure you do so before November.