I've done my part for Earth Day. I did as little as possible, thereby consuming as little energy as I could, for the first 12 hours of this annual day of attention to environmental issues.

Too bad there's not a tax break for laziness!

But there are scads of other energy and environmental tax benefits. Here's a quick roundup, as well a look at the many ways energy, the environment and taxes are connected.

Automotive: How fitting that Earth Day this year falls in the week when, for the first time in U.S. driving history, the nationwide average price of gasoline hit $3.50 per gallon.

You can count on it going higher as we head into the prime summer vacation drive time. So it's no surprise that politicians are again talking about giving us break from the federal gas tax. One of those is none other than the GOP presidential candidate (I don't still have to refer to him as presumptive, do I?).

University of California at Davis economics professor Christopher Knittel tells Salon that while politically McCain's proposal is a great idea (lower taxes, relief from high pump charges), for the economy and for society at large it's a terrible idea.

Plus, in many cases it's state taxes that add a lot more to the pump prices.

According to the American Petroleum Institute, in the first quarter of 2008 the average state gasoline tax was 28.6 cents per gallon. Add the federal fuel tax and the nationwide average gas tax came to 47 cents per gallon. 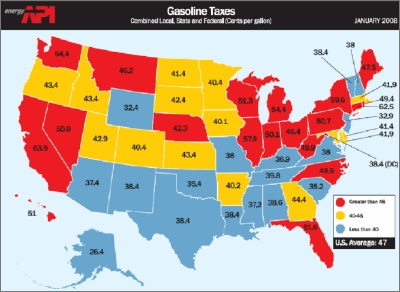 Those figures include the 18.4 cents per gallon due the federal government from its levy. On average, states collected another 18.2 per each gallon of gas. Then the add-ons begin, such as sales tax, gross receipts tax, oil inspection fees, underground storage tax fees and miscellaneous environmental fees. Those extra charges bring the average state gas tax up to 28.6 cents per gallon.

For a full list of state fuel taxes, check out this page compiled by the Federation of Tax Administrators.

California collected the most in gas taxes: 63.9 cents. Maine was just over the average at 47.5 cents and Ohio just under it at 46.4. Texas, which has a reputation as an oil state collects 38.4 cents per gallon, but that's not the smallest fuel tax figure. Thirteen other states have lower levies, with the lowest state fuel taxes being 26.4 per gallon in Alaska.

If those figures have got you thinking about a more fuel efficient car, then Uncle Sam will reward you with a tax credit for some alternative fuel vehicles. I've covered this in much detail in previous blog entries (collected here; there are a lot, so it'll take a while to load and this item will show up first, so keep scrolling).

A couple of quick reminders in case you don't have time to read all those posts now. First, Toyota hybrids no longer get you a tax credit. Secondly, Honda's tax break now is being phased out, too.

Home: Last year the tax code offered several tax breaks if you made some energy-efficient improvements to your home. Most of those ended on Dec. 31, but the tax credit for installation of a solar-powered water heater or a solar system that generates residential photovoltaic electricity will still get you a tax credit of up to a $2,000 on your 2008 return.

And last week, the Senate Finance Committee included an extension of the solar provisions in a larger tax measure to extend several expiring tax breaks. Several business-specific energy tax breaks also are part of the measure. The committee's chair, Sen. Max Baucus (D-Montana) also has vowed to "build upon this package as it makes its way through the legislative process, with edits and additional items."

You can read Baucus' press release about the tax extenders here. Remarks of Sen. Charles Grassley (R-Iowa), ranking minority member on the panel, can be found here.

Look close to home, too. Some state and local governments, as well as utility companies, also offer incentives for homeowners to go greener. Find out what's available in your area at the Database of State Incentives for Renewables and Efficiency (DSIRE) interactive map.

Charitable deductions: If your favorite environmental organization is on the IRS list of registered nonprofits (check Publication 78 or GuideStar), then any donation you make to it can be deducted on your tax return if you itemize. Some states even allow you to make donations to charities, including many with an eco focus, directly on your state income tax return via check-off boxes. 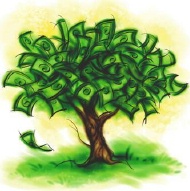 Ecological investing: You can earn green by green investing, i.e., buying stocks of or mutual funds that include businesses with an environmental focus, such as conservation programs or organic food manufacturers or retailers.

But eco investing also can include buying stock of companies that don't have a direct environmental connection, but which have taken steps to be more environmentally friendly in their operations, such as converting their offices to solar power.

As with all investments, do your homework and find an environmentally friendly fund that meshes with your personal philosophies and financial goals.

Regardless of the investment focus, the tax treatment is the same. If you sell an asset that you hold for more than a year, then you'll pay lower capital gains tax rates on the profit.

Get some eco investing ideas at socialPicks, BellaOnline, or simply Google "green investments."

Well, that's about it for me. I'm going to power down again and do my part to minimize my carbon footprint for the rest of the day.